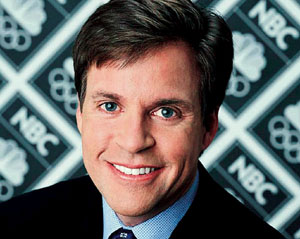 No sporting event has a wider scope than an Olympic telecast. Sportscaster Bob Costas, born Robert Quinlan Costas, has been anchoring the Olympic Games for NBC since the early 1990s, including Barcelona in 1992, Atlanta in 1996, Sydney in 2000, Salt Lake City in 2002, Athens in 2004, Turin in 2006, and now Beijing during the summer of 2008. The 2008 Opening Ceremonies on NBC had an estimated 17 million households watching in the United States.

Costas, raised by an Irish-American mother and Greek-American father, was born in 1952 in Queens, New York and grew up in Commack, New York. His sportscasting career started while attending Syracuse University as an announcer for the Syracuse Blazers minor hockey team.

At age 22, Bob Costas joined KMOX radio in St. Louis to announce St. Louis Spirits´ basketball games. His intelligence, humor and presence during his seven years at KMOX led to a longtime union with NBC Sports which he joined in 1980.

Throughout the 28 years Costas has been with NBC, he has proven his versatility in football, basketball and baseball. Costas anchored NBC’s pre-and post-game shows for NFL broadcasts from 1984 to 1992 on “The NFL on NBC.” In 2006, Costas returned to studio hosting duties covering the NFL on NBC on the “Football Night in America” show.

In 1997, Costas began a three-year stint as the lead play-by-play man for “The NBA on NBC,” filling in for Marv Albert who was temporarily removed from his duties due to a personal scandal. Costas stepped aside when Marv Albert returned in 2000.

Costas’ superb interviewing skills were honed on his show “Later with Bob Costas” which aired on NBC from 1988 to 1994. This show featured Costas interviewing a single guest one-on-one for the entire half hour. Many times, the interviews were extended over multiple nights. Costas’ interviewing skills enable him to feel comfortable interviewing anyone from 14-time gold medalist Michael Phelps to President Bush, who took some time to speak with Bob while he was in town attending the 2008 Olympics in Beijing.

Costas has a special love for baseball, and he wrote a book in 2001 called “Fair Ball: A Fan’s Case for Baseball,” a manifesto on the problems with the game of professional baseball, which had people suggesting Costas should be baseball commissioner.