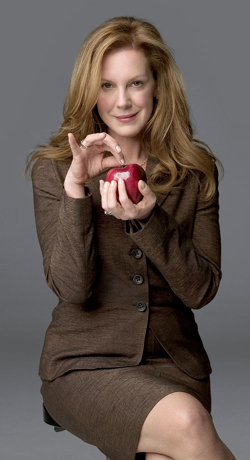 Last night, Showtime premiered the fourth season of its Emmy-award nominated show, “Weeds.” “Weeds” is a dark comedy about a mother, played by Mary-Louise Parker, who sells marijuana to support her family in suburban California. The show is well-known for its ensemble cast, including Kevin Nealon, Justin Kirk, and Elizabeth Perkins.

Elizabeth Perkins plays Celia Hodes, who often switches between friend and foe to the main character Nancy Botwin (Parker). Celia is passionate, feisty and driven to be successful, having led a charge against drugs in the show’s third season. It would not seem out of place that the actress playing this fiercely independent woman is Greek.

Perkins was born November 18, 1960 in Queens, New York. Her paternal grandparents immigrated to the United States from Greece, and in the process changed their family surname from the original “Pisperikos” to “Perkins.” Perkins was raised in Vermont and after finishing high school, pursued an acting career by studying at the Goodman School of Drama in Chicago.

Perkins began her career on Broadway, appearing in Neil Simon’s “Brighton Beach Memoirs” opposite Matthew Broderick. She received a Tony nomination for Best Featured Actress in a play. In 1986, she made her film debut in “About Last Night.” She would go on to star in many Hollywood films, including “Big” opposite Tom Hanks and “The Flintstones” opposite John Goodman.

“Weeds” premiered on Showtime in 2005 to excellent reviews and ratings. In 2007, the show was nominated for a Screen Actors Guild Award for Best Acting Ensemble in a Comedy Series.

Perkins has been acting for 22 years and has had success on Broadway, in Hollywood films and even in television. We at GHR wish Elizabeth Perkins continuing success and hope to see some more excellent roles of hers in the future. To check out the show for yourself, you can watch Elizabeth Perkins as Celia Hodes on “Weeds” every Monday at 10 p.m. on Showtime.

Nia Vardalos took to Instagram on April 7 to share updates on "My Big Fat Greek Wedding 3". Fans have been waiting to hear...
Diplomacy