Paintings and postcards from the 19th century depicted a mysterious building on top of the Temple, but it took more than a century and a half to solve the riddle thanks to an English researcher.

Cooper found a rare picture of the temple dating back to 1858. There, the author noticed a small building being built on top of the columns of the temple, something he noticed for the very first time.

He wondered if this picture was authentic or if someone put it there deliberately, using Photoshop.

Cooper then found the exact same picture, but the building was missing. The story was becoming more and more interesting.

Cooper decided to extend his research in order to uncover the truth behind this peculiarity. This is when he found a painting depicting Athens in 1833. In the painting, the temple of Olympian Zeus had a rectangular building on top of two of its columns.

In addition to this, he found a postcard from 1862, in which the temple is also depicted in this manner. Cooper believed he had uncovered the answer.

If we go back in history, we will meet dozens of Christian monks and saints known as “stylites.”

Stylites were Christians who decided to spend their lives standing or dwelling on pillars high above the ground.

After the temple of Olympian Zeus was partially destroyed during the 3rd century BC, Christian stylites began reconstruction on a building on top of the temple. 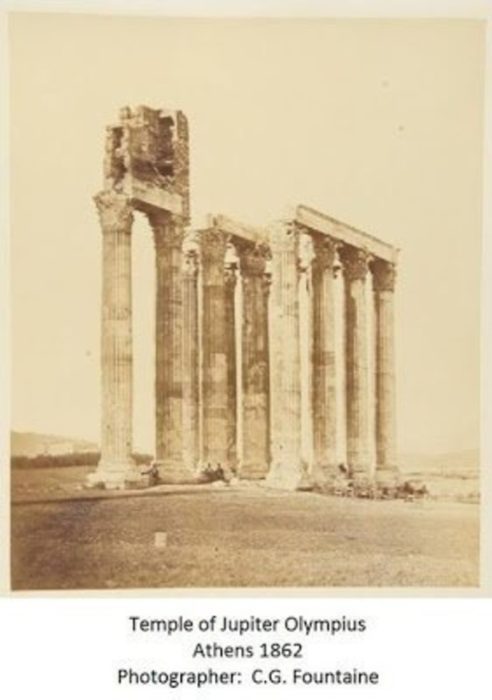 However, the reason why the building on top of the temple destroyed was unknown.

For Cooper, the answer was simple: Following newly-acquired independence from the Ottomans, the Greek state tried to revive the glorious past of Greek antiquity and didn’t want to keep the Christian or Muslim additions to the ancient ruins of the country.

Hence, they attempted to restore the temple of Olympian Zeus to its original form by removing this construction.

Construction began in the 6th century BC during the rule of the Athenian tyrants who envisaged building the greatest temple in the ancient world, but it remained uncompleted until the reign of the Roman Emperor Hadrian in the 2nd century AD some 638 years after the project had begun.

During the Roman period, the temple, which included 104 colossal columns, was renowned as the largest temple in Greece and housed one of the largest cult statues in the ancient world.

The temple’s glory was short-lived, as it fell into disuse after being pillaged during a barbarian invasion in 267 AD just about a century after its completion. It was probably never repaired and was reduced to ruins thereafter.

In the centuries following the Roman Empire, it was extensively quarried for building materials to supply building projects elsewhere in the city. Despite that, a substantial part of the temple remains today, notably sixteen of the original gigantic columns, and it continues to be part of a very important archaeological site in Greece.

Can Earthquakes Be Predicted?