A huge natural gas deposit was discovered during drills in Block 6 about 160 km off the Cyprus coastline, the ENI-Total consortium announced on Monday.

According to an official announcement by the Italian company, natural gas was detected in the Cronos-1 field of Block 6, the amount of which according to preliminary estimates is 2.5 trillion cubic feet (tcf).

According to the announcement, there is also a significant additional upside that will be investigated by further exploration in the area. 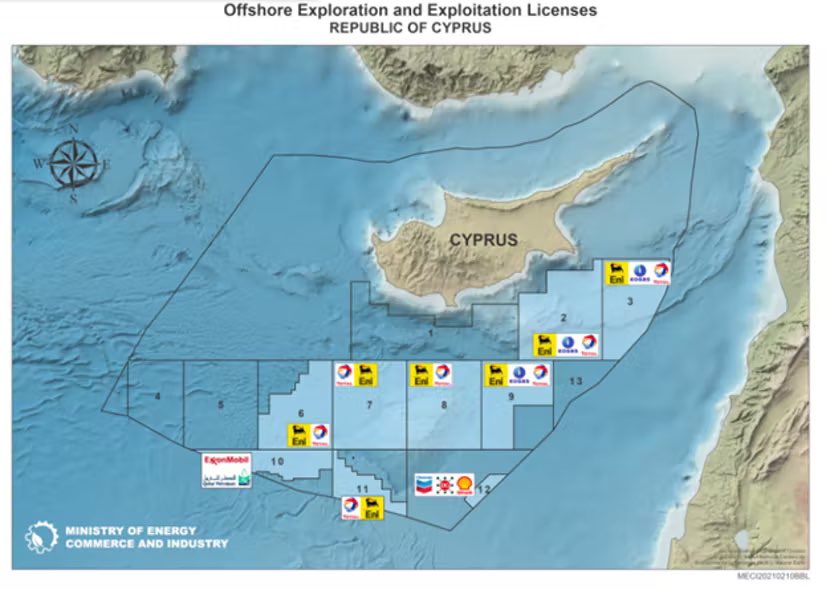 Cronos-1 well is the fourth exploration well drilled by Eni Cyprus and the second well in Block 6 following the gas discovery of Calypso-1 in 2018.

The gas discovery of Cronos-1 can unlock additional potential in the area and is part of Eni’s effort to provide further gas supply to Europe, the company says.

Eni has been present in Cyprus since 2013. The company operates Blocks 2, 3, 6, 8, and 9, and has participating interests in Blocks 7 and 11, operated by TotalEnergies.

In a separate statement on Monday, TotalEnergies also said that the drilling of another exploration well on Block 6 has been planned.

“This successful exploration well at Cronos-1 is another illustration of the impact of our exploration strategy which is focused on discovering resources with low technical cost and low carbon emissions,” said Kevin McLachlan, senior vice president of exploration at TotalEnergies.

New discoveries of gas off Cyprus “will reduce reliance on Russia”

During the cabinet meeting that took place at the presidential residence in Troodos on Monday, Energy Minister Natasa Pilides said the Tungsten Explorer drillship in Block 6 operated at a depth of 2,287 meters, revealing the presence of a 260-meter column of pure natural gas, “with good to excellent quality characteristics.”

“Moreover, a new well is being drilled in Block 6, called Zeus-1, where additional quantities of gas may be discovered and add value to this discovery,” Pilides said.

She added that, thanks to the drilling operations, new conditions are being created to exploit natural gas in Cyprus’ EEZ and that the discovery of new resources in Block 6 will aid the exploitation of other gas deposits, such as the Aphrodite field.

“Given the current situation and the EU’s need to stop relying on Russian gas, the new discoveries allow us to move more freely and join the bloc’s new programming,” Pilides concluded.