Bactria, a huge area in todays’ Afghanistan, was the eastern edge of the ancient Greek empire, established by Alexander the Great.

Alexander and his army began a massive military campaign in 334 B.C. which resulted in Macedonians establishing many Greek cities across a wide swath of Southeast Asia. His rule, and that of his successors, would eventually reach all the way to the Indian subcontinent.

Alexander and his army conquered great tracts of land between Greece and India. However, in the ancient state of Bactria, the Greek presence became much more prominent than in areas that were far closer to Greece.

The Kingdom of Bactria was located north of the Hindu Kush mountain range and south of the Amu Darya river on the plateau where Afghanistan, Tajikistan, and Uzbekistan are today.

After the death of Alexander, his empire was divided up among the generals in his army. Bactria became a part of the Seleucid Empire, named after its founder, General Seleucus.

Seleucus I and his son Antiochus I went on to establish a great many Greek towns. The Greek presence was so overpowering that the Greek language remained prominent in the region for some time.

Bactria the eastern edge of the Greek empire

However, one of the lesser-known reasons for the overwhelming Greek cultural influence in the region was the mass deportations of Greeks to Bactria. During the reign of Darius I, every single one of the inhabitants of the Greek city of Barca in Cyrenaica were deported to Bactria for refusing to surrender suspected assassins to authorities.

The Persian King Xerxes also sent prisoners to the area. The “Branchidae” were the descendants of Greek priests who had once lived near Didyma and had surrendered the temple to him. The Greek historian Herodotus also records a Persian commander threatening to enslave daughters of the revolting Ionians and send them to Bactria.

Diodotus I, the satrap, or ruler, of Bactria declared independence from the Seleucid kings in the year 245 B.C., conquering Sogdia and becoming the founder of the great Greco-Bactrian Kingdom. Diodotus and his successors resisted continued attacks from the Seleucids, particularly from Antiochus III the Great, who was ultimately defeated by the Romans in 190 BC. 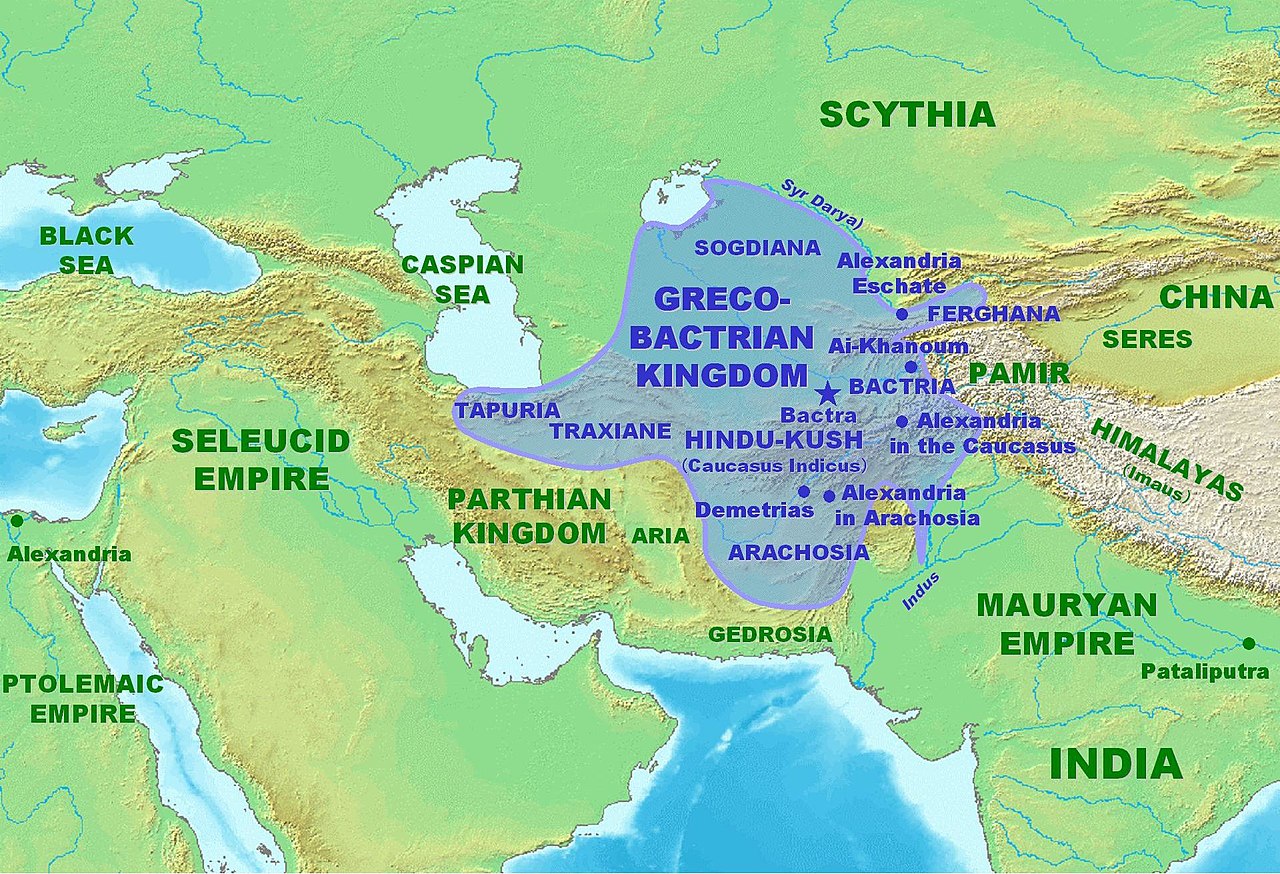 The Greco-Bactrians became very powerful militarily and succeeded in expanding their territory as far as present-day India.

The Greeks who had instigated the Bactrian revolt had become extremely wealthy, partially due to the great fertility of their country. Their great wealth enabled them to become masters not only of Bactria but also of India.

The Greco-Bactrians used the Greek language for administrative purposes, and the local languages were also influenced by Hellenism, as suggested by their adoption of the Greek alphabet and Greek words.

Bactrian King Euthydemus I and his son Demetrius I crossed the Hindu Kush mountains and began their conquest of the Indus valley. Within a short time, they were so powerful that a Greek empire seemed to be on the rise in the East.

However, corruption and internal feuds tore the nascent empire apart. When Demetrius advanced far east of the Indus River, one of his generals, Eucratides, pronounced himself king of Bactria.

Usurpers suddenly arose in every province. All of them desired to be kings, and they fought bitterly against each other.

Many of them did become kings, as evidenced by the many gold coins found centuries later in Afghanistan, but they were kings only within their own provinces. The internecine wars between them had taken a great and irreversible toll, destroying much of what had made their societies progressive and diminishing the Hellenic element.

After Demetrius and Eucratides, the kings abandoned the Attic standard of coinage and introduced a native one to attract support from non-Greeks.

In the Indus Valley, the Indo-Greek king Menander I converted to Buddhism. The last known Indo-Greek ruler, King Strato II, ruled in the Punjab region until around 55 B.C., according to some sources. Others place the end of Strato II’s reign as late as 10 A.D.

With information from Wikipedia