Elon Musk Jokes About Smoking Cannabis at Twitter Board Meetings 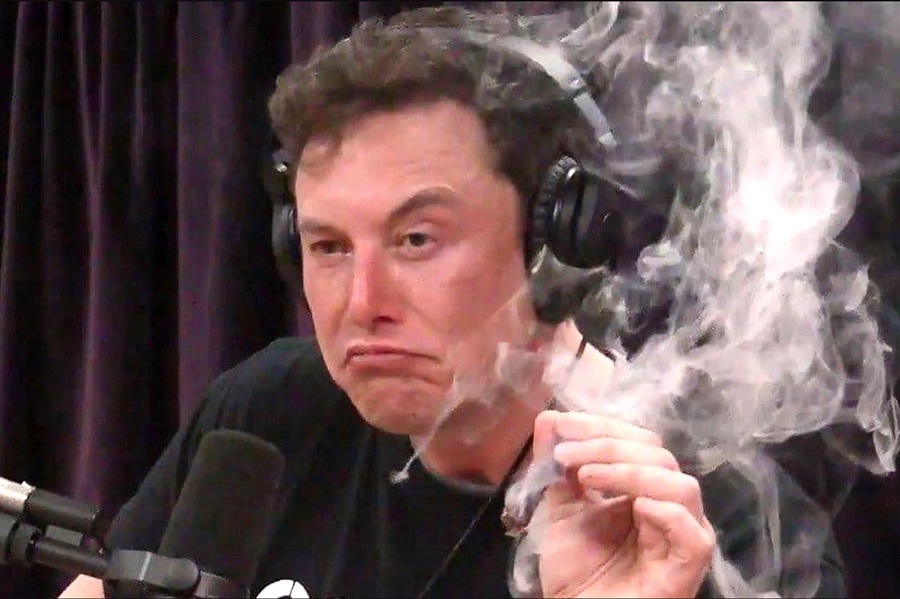 Elon Musk has jokingly implied that he would be smoking cannabis at Twitter’s upcoming board meetings after Tesla’s billionaire boss became the social network’s biggest shareholder.

The eccentric billionaire posted a meme Thursday with a screenshot of himself smoking a joint during an infamous appearance on “The Joe Rogan Experience” podcast.

“Twitter’s next board meeting is gonna be lit,” the meme says. 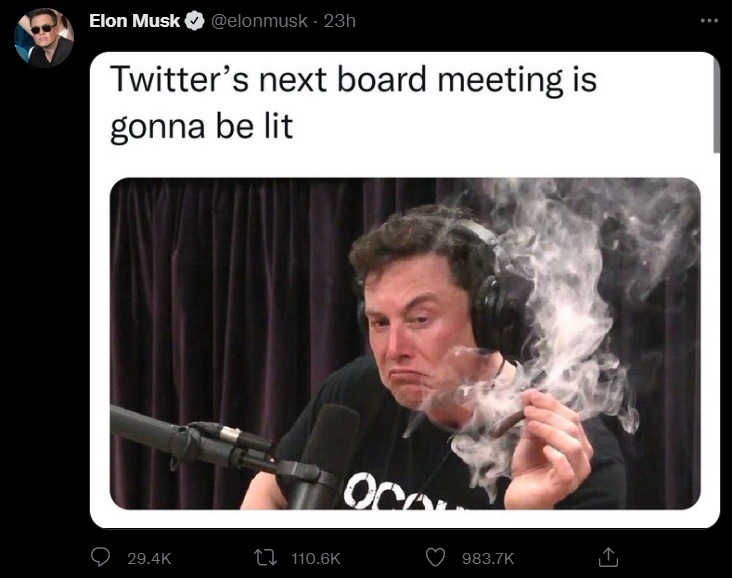 Musk, 50, caused an uproar in September 2018 when he smoked cannabis and drank whiskey with Rogan during a lengthy conversation on the podcast.

The appearance sparked the creation of its own meme format, scrutiny from federal officials, and eventually, an apology from Musk, who reportedly told SpaceX employees that the move was “not wise” since the government contractor maintains a drug-free workplace.

Musk has taken a 9.2% stake in Twitter, purchasing approximately 73.5 million shares, according to a regulatory filing Monday.

Twitter CEO Parag Agrawal announced on Tuesday that Musk was joining Twitter’s board of directors.

“Looking forward to working with Parag & Twitter board to make significant improvements to Twitter in coming months!” Musk tweeted in response to Agrawal’s announcement.

Shares of Twitter rose by more than 27% in pre-market trading on Tuesday — the second day in a row that the company has seen its stock price surge in the wake of Musk’s acquisition of 73.5 million shares.

Late last month, Musk said he was giving “serious thought” to starting his own social media company and accused Twitter of “failing to adhere to free speech principles [and thus] fundamentally undermin[ing] democracy.” This remark was made given the notion that the site “serves as the de facto public town square.”

Trump was banned from Twitter, Facebook, Instagram, and all other large social media platforms following the January 6, 2021, rioting at the US Capitol. Trump has since launched a social media platform of his own, Truth Social, but it has been beset by technical glitches and departures of key executives.

Now pro-Trump voices are calling on Musk to burnish his pro-free speech credentials and to bring back the former president.

“Twitter used to be an open field of free thought,” Pete Hegseth said on “Fox & Friends” on Tuesday, adding that “now the blue checkmarks like groupthink leftists police that thought and the corporate types at Twitter have been happy to enforce it.”

Hegseth, whose comments were cited by Mediaite, also commented that: “They pushed off Donald Trump. They pushed off a lot of conservatives. If he were to open that up, it opens up the conversation in America.”