Ukraine has raised $15 million through thousands of donations in cryptocurrencies since the start of the Russian invasion, cryptocurrency analysts said on Saturday.

Researchers at Elliptic, a blockchain analysis company, say that the Ukrainian government, NGOs and volunteer groups have raised the money by advertising their bitcoin wallet addresses online.

More than 4,000 donations have been made so far, with one unknown donor gifting Bitcoin worth $3m to an NGO, while the average donation is $95.

The official Twitter account of the Ukrainian state called on users to “stand with the people of Ukraine” and said it was accepting donations in the form of Bitcoin, Ethereum and USDT cryptocurrencies. 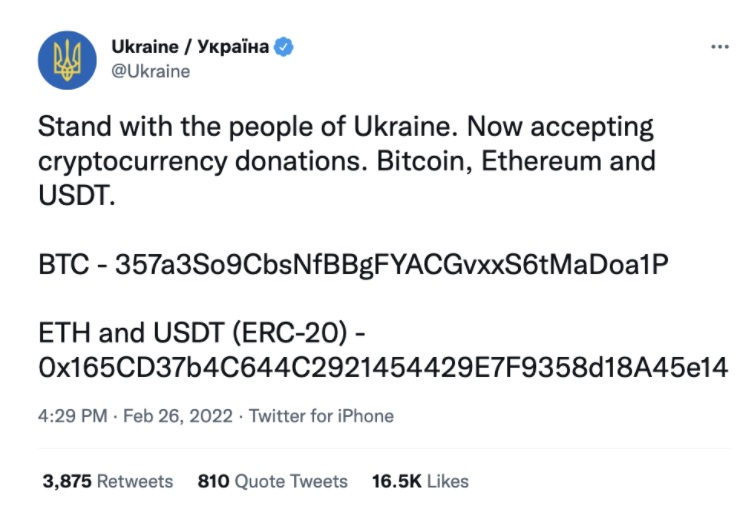 It also posted addresses for two cryptocurrency wallets and within four hours had raised more than $3.3m from donations.

Elliptic founder Tom Robinson told the BBC: “Whereas some crowdfunding and payments companies have refused to allow donations to be made to groups supporting the Ukrainian military, cryptocurrencies have emerged as a powerful alternative.”

Ukraine has also taken steps to embrace cryptocurrencies at a national level.

Ukrainian President Volodymyr Zelensky and the parliament recently reached common ground on a law that legalizes and regulates cryptocurrency.

The measure goes a long way toward elevating crypto out of the legal gray area where it currently sits, though it doesn’t go as far as the law in El Salvador, which adopted bitcoin as legal tender in September.