GRNews
GreekReporter.comDiasporaBest Greek Bicentennial Moments of 2021 All Around the World

Best Greek Bicentennial Moments of 2021 All Around the World

A list of all of the best Greek bicentennial moments around the world would really be too long to write in one story — celebrating the milestone of 200 years of Greek independence after declaring war against the Ottoman Empire was certainly a momentous and unforgettable occasion.

But here is our version of the most spectacular and meaningful moments that occurred on March 25, 2021, the day that Greece’s War of Independence began 200 years ago.

Despite the worldwide pandemic, Greeks and philhellenes all over the word made wonderful things happen in 2021 — from the military parade in Athens attended by Prince Charles to the boat parade out to the Statue of Liberty in New York Harbor to the blue and white bedecking the Sydney Opera House in Australia, the home to the most Greeks anywhere outside the homeland.

There was a great deal to celebrate, and of course Greeks all over the world did it in the most spectacular way possible. 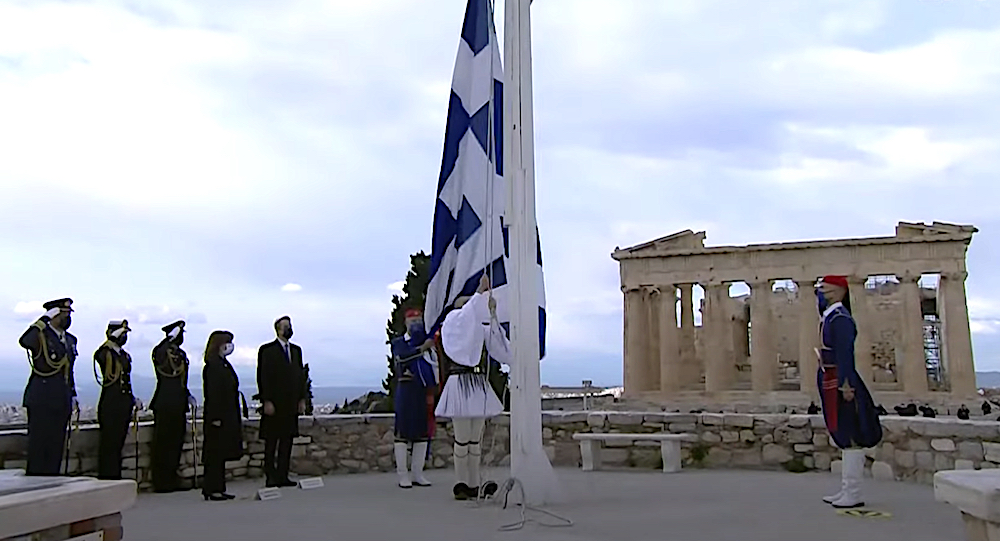 Greece celebrated its Bicentennial with a spectacular Greek Independence Day Parade on March 25 with foreign dignitaries, including Prince Charles, representing the UK, among the participants.

Due to the pandemic, the parade was off limits to the public, but it was a wonderful, pride-filled event just the same, with Army troops, mechanized units and Air Force squadrons, representing the entire array of the Armed Forces, participating, as well as representatives of the Hellenic Police, the Fire Service and the Hellenic Coast Guard.

Because of the historic significance of this year’s Greek Independence Day parade, some squads wore traditional costumes from different regions of the Greek mainland and the islands, while actual historical artifacts — many of which have not been exhibited before — were also featured in the parade.

The troops in historical uniforms led the parade, followed by mechanized columns and marching units, which were headed by the Evzones, while formations of warplanes flew in the skies over Athens in celebration of the beginning of the Greek War of Independence.

The Sail to Freedom event, held on Sunday, June 7, 2021, was a gala celebration of the Greek bicentennial, the diaspora and the contributions Americans made to the Greek cause.

New York City’s salute to Greece, two hundred years after its War of Independence in 1821, was celebrated in spectacular fashion, as sailing ships and passenger vessels sailed through New York Harbor to the Statue of Liberty in tribute to the nation and all it stands for.

The visually stunning event, taking place under beautiful sunny skies, was captured by several different camera crews and drones. Sailing ships and other vessels flying the blue and white made their way through the harbor to lay a wreath commemorating the sacrifices of all those who took part in the Greek War of Independence.

Ilias Katsos, one of the organizers of the event, said that it was a “spectacular, and probably the most significant, event, certainly in the U.S. — but maybe internationally around the world — for the Hellenic Revolution of 1821 Bicentennial.”

Archdiocese of the Americas celebrates the Bicentennial with extensive program

New York was also the locale of the Archdiocese of the Americas’ celebration of the Greek Bicentennial, with a special liturgy presided over by Archbishop Elpidophoros and presentations given by prominent Greek-American figures. Perhaps most prominent of all of them was Albert Bourla, the CEO of the Pfizer company, who spearheaded the development of the world’s first coronavirus vaccine.

Boston, Massachusetts, a hotbed of philhellenism during the time of the Greek War of Independence, hosted a number of events celebrating the Bicentennial, most of them aboard a wooden warship that once hosted Kolokotronis and other luminaries of the Greek Revolution.

The ship, which was launched in 1797, once hosted this giant of the Greek Revolutionand others when it was moored off the coast of the country during the years of the War. Incredibly, it is still in the water today, in Boston and is still a commissioned warship in the US Navy; its wooden decks on which the great figures of the Greek War of Independence one strode was the setting for gala ceremonies on March 25. 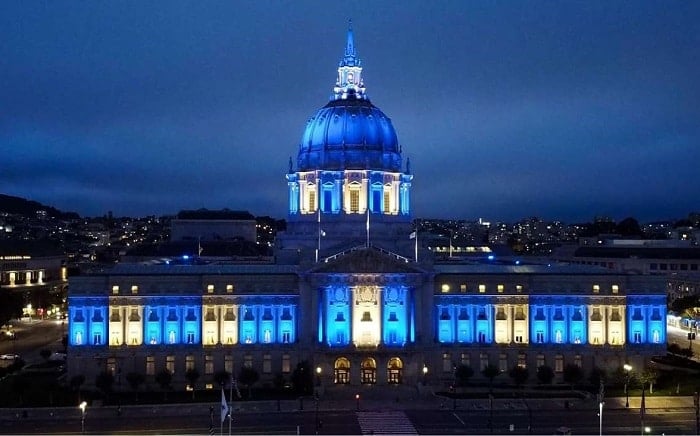 Taso Zografos, a great patriot and the dynamic President of the United Hellenic American Societies (UHAS) of Northern California, was instrumental in encouraging various Californian entities to celebrate the Greek bicentennial this year.

Zografos, along with other Greek-Americans, convinced California authorities to mark Greece’s Bicentennial by illuminating the iconic bridges and buildings in the State.

Thanks to his efforts, the pillars at LAX, the city of Los Angeles’ international airport, and the California State Assembly will be illuminated in the colors of Greece on the day and the Greek flag will also be raised at the California State Capitol Building in Sacramento. 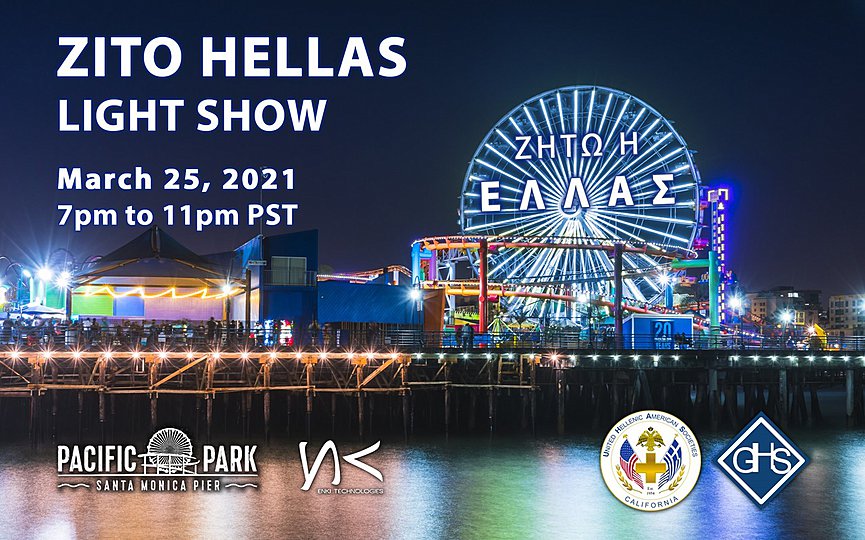 The Santa Monica Pier’s “Pacific Wheel” put on a special, evening-long Light Show for Greek Independence Day on the 25th, showing the Greek flag and the date of the beginning of the War of Independence on the sides of its iconic Ferris wheel.

South Africa, home to another thriving Greek diaspora community, created the largest Greek flag in the entire world on March 25 to mark the bicentennial of the War of Independence.

The Hellenic Federation of South Africa (HFSA) celebrated several commemorative events in Johannesburg, South Africa on the great day, bringing together the community despite all the difficulties posed by the pandemic.

The largest (1,500 square meter/16,146 square feet) thread-sewn Greek flag ever produced was flown as part of the celebrations. A large-scale “Greek Freedom Dance” was also choreographed in tandem with an original composition produced by one of the Greek South African community’s Greek scholars as well.

The lone student at a tiny elementary school on the Greek island of Arkioi, near Patmos, celebrated the Greek bicentennial by donning the iconic costume of an Evzone warrior and raising the Greek flag on Thursday, March 25.

Christos Kampousos is taught by one teacher, Maria-Faidra Tsialera, who requested to be transferred to the island although she was brought up in Greece’s second-largest city, Thessaloniki.

She makes it possible for Christos to be able to stay on the island year-round and receive the normal education to which all Greek children are entitled.

In a way, although this was the smallest Bicentennial celebration all year, Christos’ flag raising ceremony represented the ultimate symbol of Greek independence — the willingness to go it alone despite all odds and the determination to show his love of his country and heritage that Greeks are known for all around thew world.