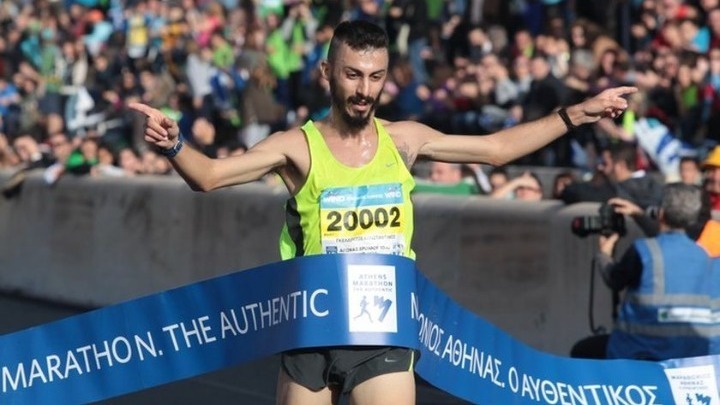 The runner-up, Panagiotis Bourikas, was more than five minutes behind, in 2:22:33, followed by Haralambos Pitsolis in 2:24:05.

Greece’s Gloria-Tziovana Privilegio won the women’s race in 2:41:30, nearly seven minutes ahead of her closest rival. She was 23rd overall.

There were 9,558 runners registered to line up at the start in the village of Marathon, less than half the record 20,041 who ran in the previous race in 2019.

Gelaouzos, 31, had finished 3rd in 2019. This time, he set a personal best for this particular race, where times are slowed by the demanding, hilly course.

The course record, 2:10:34 is held by Kenya’s Felix Kipchirchir Kandie, set in 2014. Kenyan runners have won the race 16 times since 2001. Kenyan athletes were not among the competitors this year.

Among all the Olympic sports events, the Marathon Race stands out as it was born by a true historic and heroic event.

It was a true triumph accomplished by the news-bearing foot soldier from ancient Athens,  who announced – with his last words – the victory of the Greeks against the Persians during the Marathon Battle in 490 BC.

The 42,195m Marathon Race became one of the most competitive events during the revival of the Olympic Games in 1896.

A Greek athlete named Spyros Louis, running what has ever since been referred to as the Original Marathon Course from the ancient city of Marathon to the Panathenaic Stadium in Athens, won the gold medal of the first modern Olympic Games and became a legend of Greek and International Athletics.

The Marathon Race has always had a prominent place in the hearts and minds of sports enthusiasts, as it represents the highest effort where the human body, soul, and mind are tested to their limits as the runner presses himself/herself to reach the finish line.

Since 1982, the Athens Classic Marathon has been dedicated to Gregoris Lambrakis, the athlete, scientist and Member of Parliament, who was murdered in the 60s and, after his death, became a symbol of Human Rights.