The Antetokounmpo brothers announced on Thursday they are offering half of their e-shop earnings to the victims of the catastrophic fires in Greece.

Through the social media the four bothers announced the touching move for the victims of the August fires in Evia, Attica and the Peloponnese. “We are all brothers,” they said in the announcement. 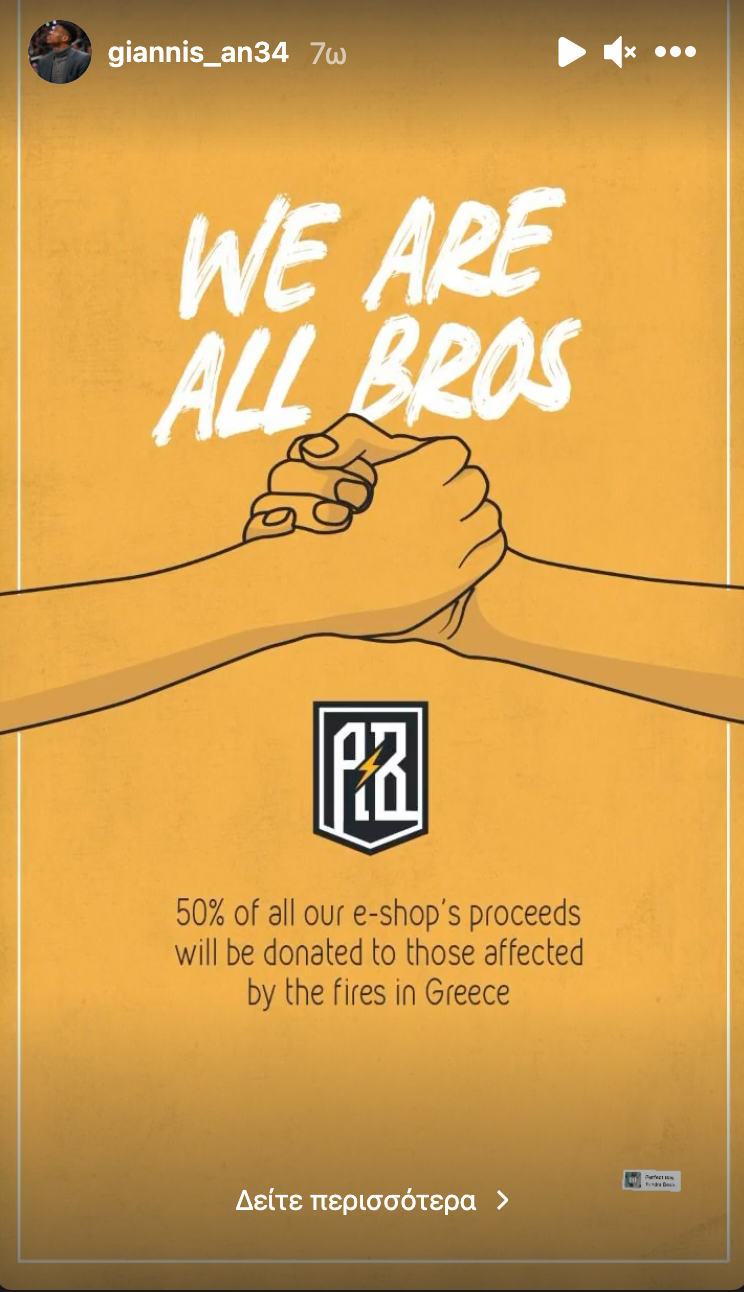 The Antetokounmpo brothers, all born in the Athens neighborhood of Sepolia to Nigerian immigrants, are particularly fond of their home country and are known to lend their assistance to important causes. Their online shop can be found here.

Earlier this month Giannis announced, in cooperation with a sports betting firm, that he would pay for short-term accommodation at five Athens area hotels for those made homeless by the wildfires.

Earlier in August, the brothers were celebrating the Milwaukee Bucks’ big NBA championship win, and their own historic achievements in basketball between them, with a visit to Athens.

Giannis shared photos of himself and Kostas and Thanasis posing with the Bucks NBA championship trophy in front of the Acropolis of Athens.

Giannis, Thanasis, Kostas and Alex Antetokounmpo have been making the mark in the world basketball in the last few years.

First it was Giannis Antetokounmpo being named the NBA MVP — not once, but twice. Then it was Kostas Antetokounmpo winning a championship ring during his stint with the Los Angeles Lakers.

Giannis followed that up with a ring of his own this past season with the Milwaukee Bucks, alongside eldest brother Thanasis. Now, their youngest sibling Alex, the fourth Antetokounmpo brother, has some shiny new hardware of his own, after winning earlier in the week the NBA Summer League title playing for the Sacramento Kings.

Greece has seen large fires burn in Varybobi north of Athens, North Evia island, Ilia and Arcadia in the Peloponnese and recently at Vilia, west of Athens.

Prime Minister Kyriakos Mitsotakis described the hundreds of fires that ravaged parts of Greece in just a few days as “a natural disaster of exceptional magnitude”.

Hundreds of homes were destroyed by the fires and thousands of people were left homeless.

The environmental devastation from the fires in northern Evia is enormous, according to a statement issued by the meteorological service of the National Observatory of Athens (NOA).

The fires in August claimed the life of a volunteer videographer working for the firefighters. In 2018, 102 people died in the fire at Mati, east of Athens, which was the second-deadliest wildfire of the century after the 2009 bushfires in Australia which killed 173 people.