As Greece fights for the ninth consecutive day the fires that have ravaged huge parts of the country, the assistance provided by dozens of nations has reached unprecedented proportions.

Twenty-three countries, including 11 EU member states, and 12 non-EU member states have rushed to assist their exhausted Greek colleagues, in the largest civil protection operation that the country has ever seen in its history.

Assistance to Greece Surpasses Every Expectation

Approximately 1,300 firefighters and more than 250 trucks have already arrived and are in full operational capacity across Greece.

Of these, nine aircraft, 236 fire trucks, and 1,014 firefighters and rescuers are deployed under the umbrella of the European Union in Greece.

Brussels is covering at least 75 percent of the operational costs of this titanic operation.

Greek Reporter spoke to the chiefs of the firefighting teams from Ukraine, Slovakia, and Poland which have arrived to the Greek island of Evia.

Colonel Alexander Horobezic told Greek Reporter that a total of 100 firefighters have arrived in Greece from Ukraine.

”We feel good being here helping a friendly nation like Greece,” the Ukrainian firefighter stated warmly.

”We have great communication and relationship with our Greek colleagues; the only problem is that we speak different languages,” the Ukrainian member of the team noted.

A similar picture was portrayed by Peter Kovalik from Slovakia.

”We have brought here a total of 77 firefighters and 30 trucks,” the team leader of the Slovak firefighters told Greek Reporter.

”We arrived and met with our Greek colleagues, with whom we have great cooperation and coordination,” Kovalik noted.

Greece Fires: “We Have Never Seen Flames Like This”

Asked about the situation on the island, Kovalik was blatantly honest: ”This is the first time the Slovak firefighters have to deal with such big fires,” he said.

”The fires are really, really large,” he said, adding that this is a great opportunity for the Slovak team not only to help their spent Greek colleagues but also to see how Greece’s firefighters work and deal with fires of such magnitude.

Speaking with Greek Reporter, Captain Rafael Solovin from Poland said that his nation has sent 143 firefighters and 46 vehicles to Greece.

”We’re happy to be here,” he said while his colleagues were assisting the efforts to put out another fire on Evia.

”We’re here through the European Civil Protection Mechanism,” he added.

The mission of France to assist Greece has been the largest civil protection mission of the country in history.

According to a statement issued recently by the French embassy of Athens, a total of 250 members of the French Civil Protection agency are participating in the fight against forest fires in Greece.

”This is the largest land mission of the French Civil Protection abroad, ever” the French embassy stated. 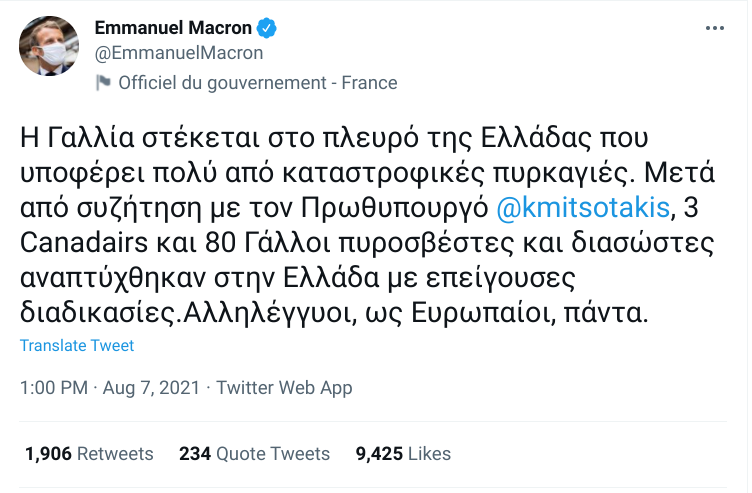 ”France stands by Greece, which is suffering greatly from catastrophic fires,” French President Emmanuel Macron said on August 7, in Greek.

Dozens of firefighters from the Czech Republic and the United Kingdom have also been deployed in Greece.

Most of their forces have been sent to the central Peloponnese to help Greek firefighters who are dealing with the blazes in Arcadia.

“Our main mission is to help the Greek firefighters and the residents to extinguish the forest fires because there are many outbreaks and the size of the front is incredibly large,” Rihard Fram from Czechia told Greece’s STAR Channel on Tuesday.

The United Arab Emirates, Greece’s most loyal friend in the Gulf, sent additional help on Wednesday.

This time, Abu Dhabi, in cooperation with the Red Cross of Greece and the Red Crescent of the UAE, sent a total of 90 tons of humanitarian aid that will be used to assuage the pain of the victims of the fires.

Hundreds of German firefighters are also on the ground in Greece. The German professionals — as well as volunteers — traveled from Germany to Italy with their trucks and then took ferry boats that transferred them from Italy to Greece. A volunteer unit that was created in 1891 called the Freivillige Feuerwehr Urberach posted updates about their passage to Greece on the internet.

The volunteer group’s motto is: “Our Freedom for Your Security.”

Greeks Grateful for the Wave of Support

Greeks have been expressing their gratitude for the support the country has been receiving in the last few days.

According to Romania’s Ziare news website, the authorities of the northern Greek island of Thassos have pledged to accommodate and offer free vacations in the summer of 2022 to the entire Romanian firefighting team that has come to Greece to tackle the wildfires.

Local residents on Evia have been cooking food for days for those who rushed from foreign lands to assist the firefighting efforts in their country.

“We give 100% of our strength every day,” Samsodan Catalin, the leader of the Romanian delegation told Greece’s Ethnos newspaper.

”For us every European nation is important, let alone Greece,” he stated.

A score of countries outside of the EU also sent help to Greece, showing how serious the situation is at the present.

During these critical times that Greece goes through we are not alone. Many countries stand effectively by our side offering human and other resources, help and support. We warmly thank them for their solidarity!