By Assil Giacheia
September 18, 2019
Facebook
Twitter
WhatsApp
Linkedin
Email
Dimitsana is a delightful medieval village, located in the Peloponnesian district of Arcadia, southern Greece, just three hours by automobile from Athens. The picturesque village is at an altitude of 1000 meters (3,280 feet) which means it can see a fair bit of snow during the months of winter.
This historic village is a popular winter destination in Greece but it is not even on the radar of the majority of foreign tourists.
Dimitsana’s beautiful mountain scenery, stone houses, and its history as the heart of the Greek independence movement in the early 1800’s make it a fascinating place to explore.
The village played a vital role in the country’s struggle for independence because its Greek school, founded in 1764, was known for creating the ideas which eventually led to the popular uprisings against the Turks.
The village also had numerous gunpowder factories as well as a branch of the secret Filiki Eteria (“Friendly Society”), where Greeks met to discuss a possible revolt against their Ottoman Turk overlords.
With such a beautiful location and fascinating history, how about planning a quick winter break to the Dimitsana area?
Things to do
Dimitsana was a commercial center in the eighteenth century and especially thrived during the years up to and including the Greek Revolution of 1821 against the Turks.
The village’s position along Lousios Gorge meant that water was at their disposal to power mills which were involved in tanning business, metal works, milling flour, and most importantly, producing gunpowder.
The Greek freedom fighters couldn’t possibly have had the firepower that they did when fighting the Ottomans without the gunpowder mills of Dimitsana.
A number of secluded monasteries which are also hidden along the cliffs lining Lousios Gorge became centers of education — and resistance — during those Revolutionary years.
Numerous celebrated patriarchs and Greek resistance fighters made Dimitsana their home. Today, this lovely and historic village is home to two small museums which celebrate its important past, the Town Library and the Ecclesiastical Museum.

Dimitsana Town Library
Inside the Town Library one can find a small but fascinating folklore collection, with many objects depicting everyday life in Dimitsana during the nineteenth century.
There are a number of more historically important objects as well, including a number of books from the sixteenth century which wealthy local residents had translated from Latin to Greek, and were printed in Venice and other European cities.
There are also several artifacts from the lives of well-known Dimitsana residents during the 1821 Greek Revolution.
The library initially began with the books from the local monastery, which before the start of the War of Independence numbered over 500 volumes.
By the end of the war, only 500 survived intact, not because of any incidents caused by the war itself, but due to the the fact that their pages were found to be useful for wrapping the gunpowder created at the local mills.
One can imagine that the wads of ammunition must have been quite beautiful, wrapped in the printed pages of the religious texts.
Ecclesiastical Museum
Dimitsana’s best-known native son is none other than the Ecumenical Patriarch of Constantinople Grigorios V, who served as Archbishop of Constantinople at the beginning of the Revolution.
Blamed by the Turks for not effectively suppressing the uprising, the Patriarch was arrested after the Easter Sunday liturgy of 1821 and hanged, his body remaining on the gibbet for two full days. A massacre of the Greek population of Constantinople then ensued. Gregory is revered as an Ethnomartyr of Greece.
His house had been restored and made into an Ecclesiastical museum, displaying pieces from surrounding monasteries and the churches of Dimitsana, with most of the items from the eighteenth and nineteenth centuries.
The Open-Air Waterpower Museum
A small road to the south of Dimitsana leads down into Lousios Gorge with signs giving directions to the location of the Open-Air Waterpower Museum of Dimitsana.
This interesting Museum focuses on the importance of natural hydraulic power in traditional societies, and it shows the pre-industrial revolution technologies which used water as their main energy source.
The various mills which used waterpower are surrounded by abundant running water and lovely shaded groves, where the whole family can enjoy a pleasant walk.
A great amount of attention and care to detail has been put in recreating and restoring these various water-powered mills, which are all fed from a spring that runs down the mountains before joining the Lousios River.
The museum is a great example of what can be achieved with the proper funding and care. It is well worth a visit. 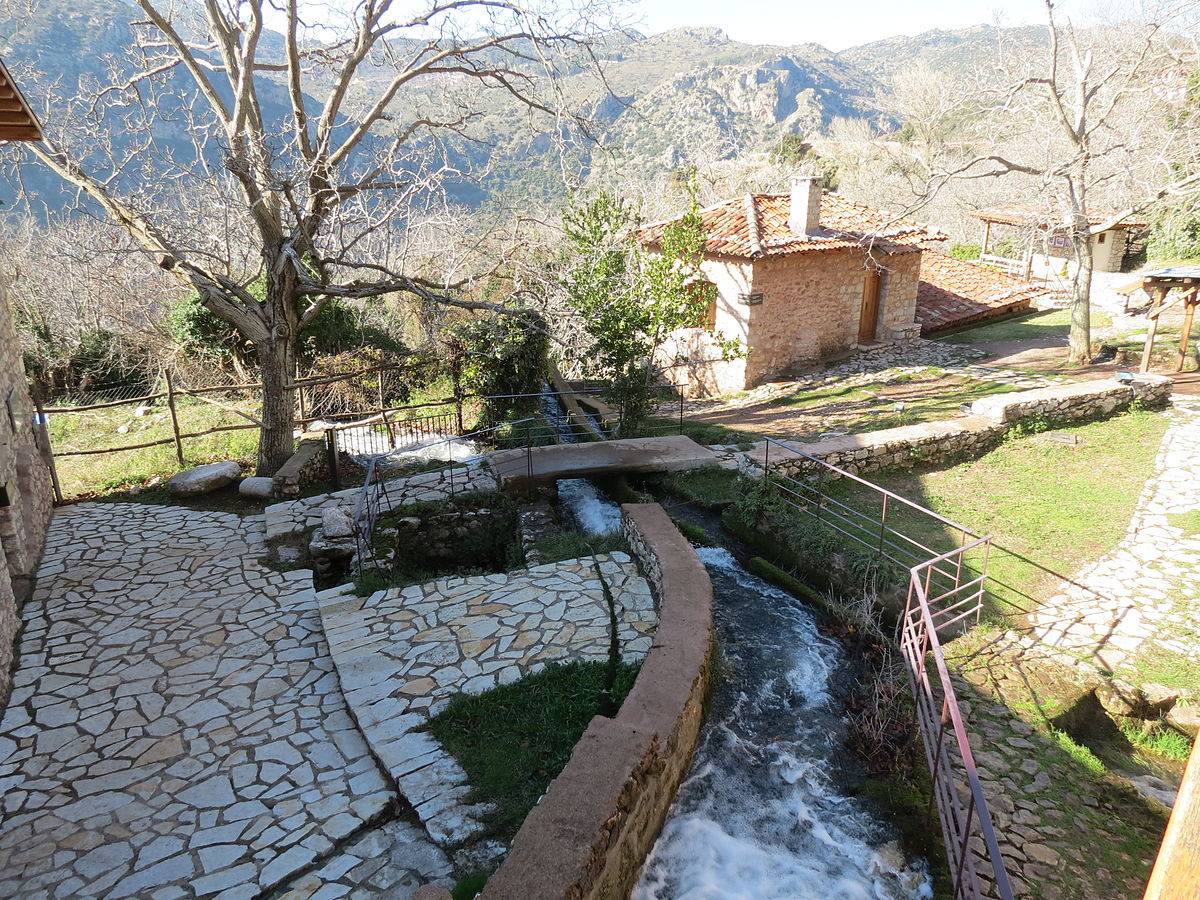 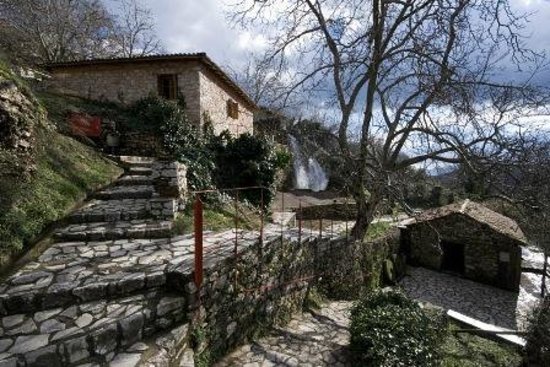 Hiking Lousios Gorge
A road which starts from the Open-Air museum will lead you down into the  spectacular Lousios Gorge.
The landscape around the gorge is simply breathtaking. Numerous monasteries are perched along the nearly-perpendicular sides of the gorge, and several old water mills are stlll there to be viewed as you walk along the paths.
The museum kiosk has reasonably-priced books and leaflets which show all the nearby trails. There are also a number of offices in the village which provide guided tours of the area.
Note: If you go during wintertime, have a vehicle and the appropriate equipment that can handle the snow. 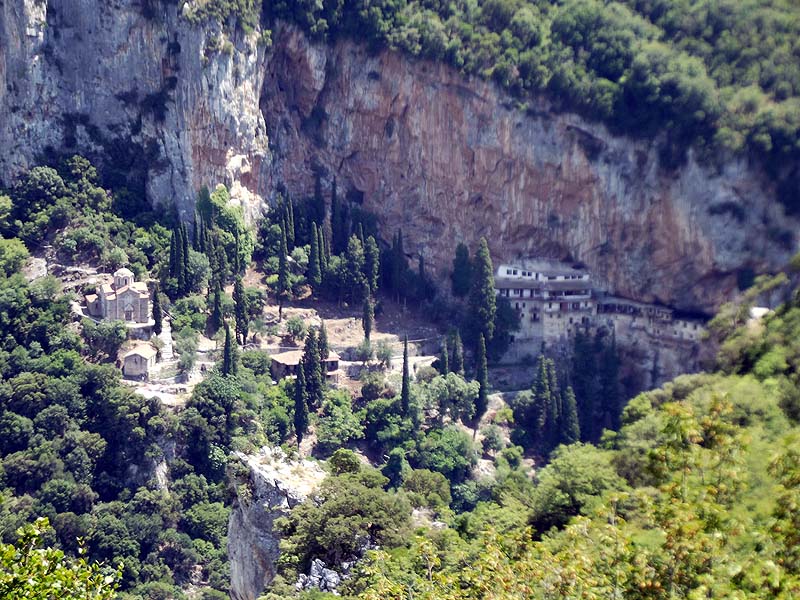 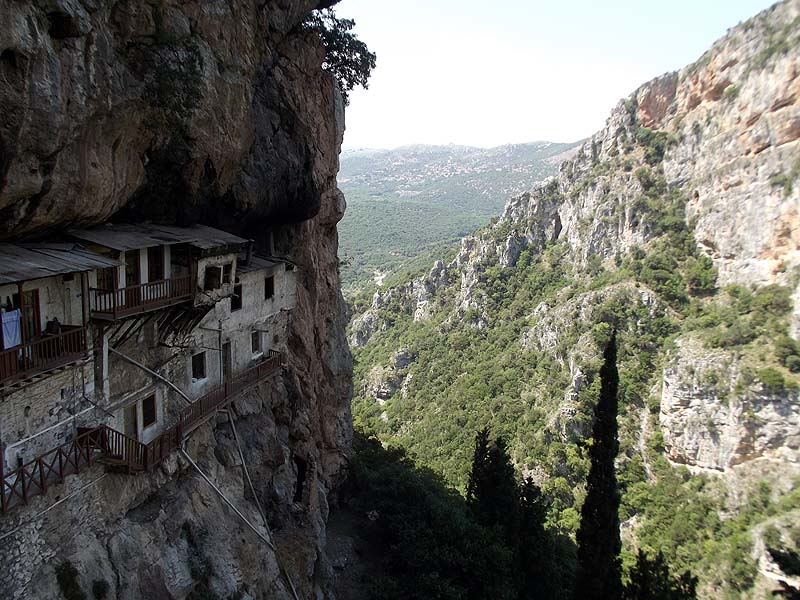 Day Trips from Dimitsana
This gorgeous little village is situated perfectly for a number of great day trips around the wider area which could include visits to Stemnitsa, located about 14 km (8 miles) further south and ancient Gortinia, which is a further 10 km (6 miles) or so beyond that.
All the roads in the region provide beautiful views down Lousios Gorge, so if you have a car just get in and go. You will find churches, innumerable picturesque viewpoints, and a great deal of picturesque and historically-important villages and museums.
Inland Greece is full of such gems, just waiting to be discovered, they are just as lovely in the autumn and wintertime as they are in the summer.

Dimitsana and the central Peloponnese region generally is a great place to get your fill of historical monuments, set amidst stunning mountain scenery. 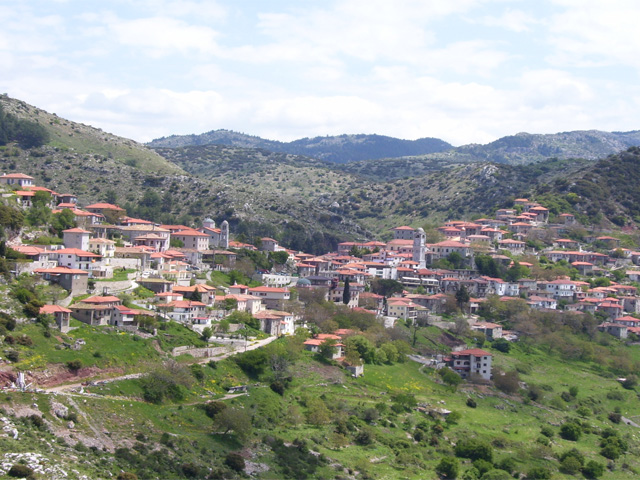