Greek firefighters backed by water-dropping aircraft are battling a major wildfire near the town of Loutraki, west of Athens on Thursday. As of Thursday afternoon, nearly 2,000 hectares (20,000 stremmas) of pristine forestland had been destroyed by the fire that started on Schinos in the Loutraki area around 9:45 on Wednesday night, Deputy Civil Protection Minister for Crisis Management Nikos Hardalias said during a live emergency briefing.

According to firefighters, the blaze broke out late on Wednesday and is burning a pine forest in the area where many Athenians have vacation homes. By midday on Thursday, smoke was obscuring the view of the Acropolis in Athens and was even seen in the sky over the islands in the Aegean.

For precautionary reasons the towns of Schinos, Agia Sotira, Vamvakes and Mavrolimni, as well as two monasteries, have been evacuated, while preliminary reports say that the wildfire has caused damage to several homes.

Sixty-two fire engines crewed by 182 fire fighters, seven teams of firemen on foot, a special Fire Brigade vehicle and water-dropping helicopters were out battling the blaze on Thursday.

There are no reports of injuries as of now.

The mayor of Loutraki, George Gionis, told SKAI news on Thursday morning that the fire is moving towards the town of Alepochori, a popular resort in the Gulf of Corinth.

A spokesman for the Fire Service speaking to ANT1 TV said estimated that there are about 1,000 homes situated in the area affected by the wildfire.

He added that volunteers are also helping the efforts of the Fire Service.

According to the meteo.gr weather service, the thick smoke from the fire west of Athens has reached as far as Ikaria in the eastern Aegean. The site published photos of the smoke in different locations, some of which are hundreds of miles away from the region of Loutraki.

A new message via the European Emergency Number 112 was sent by the General Secretariat for Civil Protection for the evacuation of a village in Alepochori.

All citizens located in the wider area of ​​the town of Aigeirouses-Dourakos, are called to evacuate immediately via the coastal road in the direction of Alepochori-Megara for precautionary reasons, due to the forest fire and the rapid increase inwind intensity in the last hours.

Earlier, with a message sent via 112, residents from the wider area of ​​the towns of Hani Derveni, Ano Pefkenea and Kato Pefkenea were called to leave the area immediately in the direction of the city of Megara for precautionary reasons.

The fire continues to be ongoing, burning dense pine forests.

Traffic is now being stopped at the following points due to the fire:

B) At the 21st km of the provincial road Megaron – Alepochori, to Alepochori

C) On Chrysanthemon Street in the Delfinia area, toward Mazi

D) In ​​Agiou Ilias Street in the direction of Sora

E) On the provincial road Megaron – Alepochori, from the EKO gas station, toward Alerpochori, Pefkenea area

F) On Chanion Street, in the Krya Vrysi area

G) On Morava Street, from the national stadium of Megara to Kavelari.

The traffic was also stopped on the provincial road Megaron-Alepochori, from Agiou Stefanou street, down toward Alepochori.

An emergency briefing will be held at 6 pm by the Deputy Minister of Civil Protection and Crisis Management, Nikos Hardalias, from the Civil Protection Ministry, regarding the developments around the fire that started yesterday.

There has been an appeal of the Civil Protection through 112 for removal of the inhabitants of the towns near Megara due to the fire.

“Going to be a hard night ahead”

On Thursday afternoon, Nikos Hardalias addressed the pubic, saying “It’s going to be a hard night ahead.”

The pine forest fire, he said, began during cleaning work in an olive grove by the Gerania mountain range and has spread through the dense forest, with the help of strong winds registering 7 and 8 on the Beaufort scale. The forestland had not been maintained for years, the Minister said.

Hardalias said firefighting forces from mainland Greece had converged on the area east of Corinth as of midnight. Several villages in the area of Alepochori have been preventatively evacuated, and “a battle is being waged under difficult circumstances,” Hardalias said.

Battling the blaze since about 6:10 on Thursday are 265 firefighters, 10 Army units on foot, and volunteer firefighters, with regional water trucks. By air, efforts are being assisted by eight Canadair and nine PZL aircraft, along with two Chinook, one Super Puma and one BK helicopters, and a police helicopter helping with the coordination.

The overall coordination is being carried out from the Fire Brigade’s mobile crisis center, which has arrived in the area.

“It will be a difficult night,” Hardalias said, and called on residents of all areas between the Gerania mountains and Megara to be on alert through the night.

Special arson investigators have been on the scene since Wednesday night, while the EU’s Copernicus satellite service has been activated to track the fire from the time of its origin.

Earlier in the day, the Ministry of Health issued directives for residents of the Attica basin, where the smoke is now covering the skies, to keep children and older people indoors, especially those with chronic heart and pulmonary conditions. 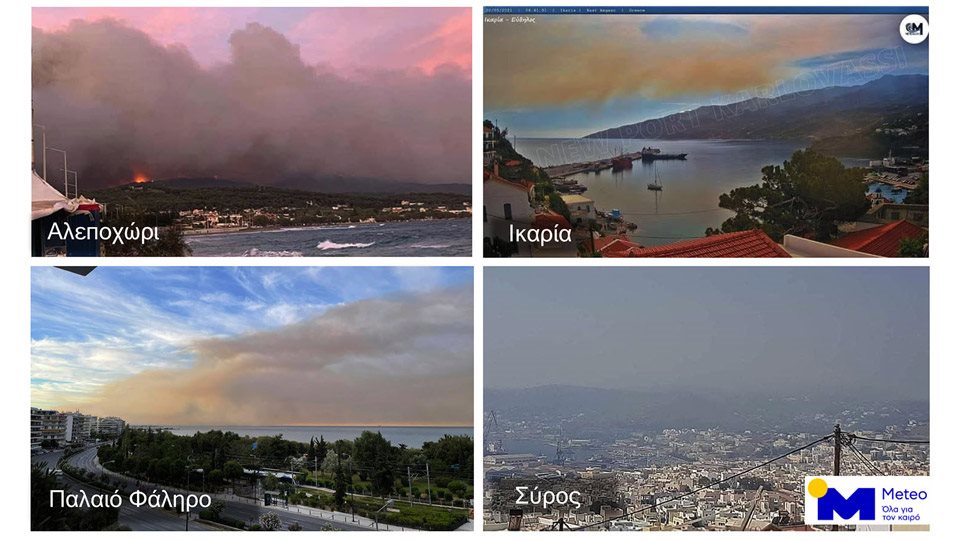 Wildfires are common during Greece’s hot, arid summers. In 2018, a major blaze that swept through the Mati resort, a short distance south of Nea Makri, caused 102 deaths.

The fires were the second-deadliest wildfire event in the 21st century, after the 2009 Black Saturday bushfires in Australia that killed 173.

This is a developing story