By Tasos Kokkinidis
November 25, 2020
Facebook
Twitter
WhatsApp
Linkedin
Email
Maria Moscholiou, the legendary High Priestess of the Olympic Flame ceremony at Ancient Olympia, has died in Athens.
Moscholiou supervised the dramatic Lighting Ceremonies four times in total — in 1968, 1972, 1976 and 1980.
She was presented with the City of Athens Medal in recognition of her extensive contribution to the dissemination of the Olympic Ideal.
Moscholiou was born in Athens and studied the art of drama at the National Theatre, where she performed for many years.
In one of her rare interviews she stated: “Creating the Olympic Light is an unbelievable feeling. Watching what happens next in the countries where the Olympic Flame is travelling is unbelievable.” 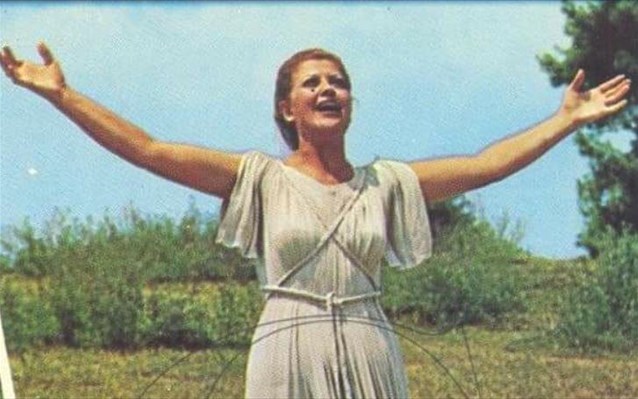 She had recalled the welcome ceremony held in Mexico in 1968, when the flame passed above streets that were covered in flowers and in 1976 in Canada.
“In Montreal, the flame arrived through laser rays, and I remember Prime Minister Pierre Trudeau saying in his speech that if the ancient Greeks could see that lightning transmission of the Flame, then they would say that it happened with the gods’ intervention”.
The Canadians presented her with a gold-plated torch and a large flag from the Games.
The ritual
The ritual of the Lighting of the Flame starts from the Altar of Hera, in front of the goddess’s temple (called the Heraion), which is opposite from the Temple of Zeus, at the archaeological site of Olympia.
The ceremony begins with the procession of the priestesses, all under the supervision of the High Priestess. Dressed in Archaic-style clothing, priestesses then surround the altar.
Then, the High Priestess calls the Sun God Apollo to light the torch using a concave mirror to focus the sun’s rays. The High Priestess then says a prayer to Apollo and Zeus.
When the flame lights, the High Priestess relays the flame in a small ceramic pot and heads to the Panathinaiko Stadium with all the priestesses in procession after her.
They pass by the Olive Tree, where they stand for a moment and the “Amphithalis Pais”, the young boy (both of whose parents are alive) cuts off an olive branch, as a symbol of peace and a meaningful winner’s prize.
When the procession arrives at the Stadium, the High Priestess then lights the torch of the first runner and the torch relay begins.