US Says Greece's Kastellorizo Has Same Rights as Any Mainland Territory 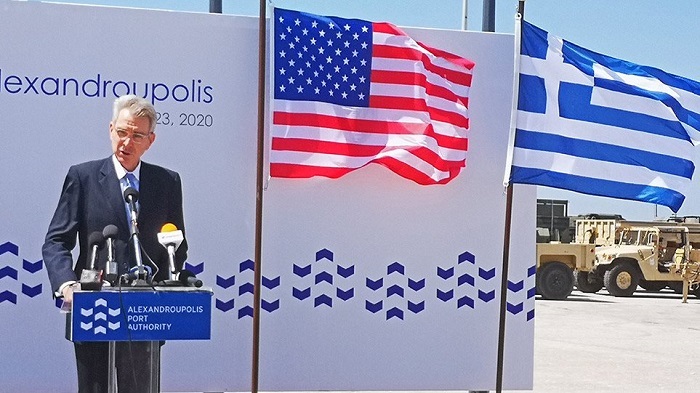 US Ambassador to Athens Geoffrey Pyatt said on Thursday that the Greek island of Kastellorizo has exactly the same continental shelf and EEZ rights as does any mainland territory, in the clearest statement by a US official explicitly endorsing the Greek position on the dispute with Turkey.
Asked to comment on the reference to “disputed waters” in the US State Department’s statement on developments in Kastellorizo, Pyatt added that “the United States generally does not take a position on other states’ maritime boundary disputes but as a matter of longstanding policy we encourage states to resolve their disputes peacefully and in accordance with international law.”
“I have also made a point on many occasions and I will make it again today, that the United States adheres to the principal of international maritime law that islands, including Kastellorizo, have exactly the same continental shelf and EEZ rights as does any mainland territory,” he added in a statement to the Athens Macedonia News Agency (AMNA).
Asked by AMNA if there has been a de-escalation of the tension, he replied: “Our strong hope is that the signals that we have seen suggesting that there is a prospect of de-escalation will be followed through. I know that this is the hope of Prime Minister Mitsotakis, we heard it from the minister of defense just now, and certainly the United States shares that hope and is using our diplomatic tools to advance that objective.”
The ‘disputed waters’ statement by the US State Department was also criticized by Ranking Senator Bob Menendez, who said in a tweet:
“Let’s be crystal clear — the only country ‘disputing’ these waters is Turkey. These waters belong to Greece, and the State Department must unequivocally and publicly recognize that Turkey alone is responsible for the tension over them.”
Turkey on Wednesday strongly rejected Greece’s continental shelf claims, spurred by the Turkish seismic survey vessel Oruç Reis’ activity in the Eastern Mediterranean, calling them “irrational”.
The Turkish Foreign Ministry said the Greek island of Kastellorizo is 2 kilometers (1.2 miles) away from the Turkish mainland and 580 kilometers off the Greek coast, making “Greece’s maximalist continental shelf claims based on islands far from its mainland incompatible with international law and court decisions.”