Did Germany's Merkel Stop a Military Conflict Between Greece and Turkey? 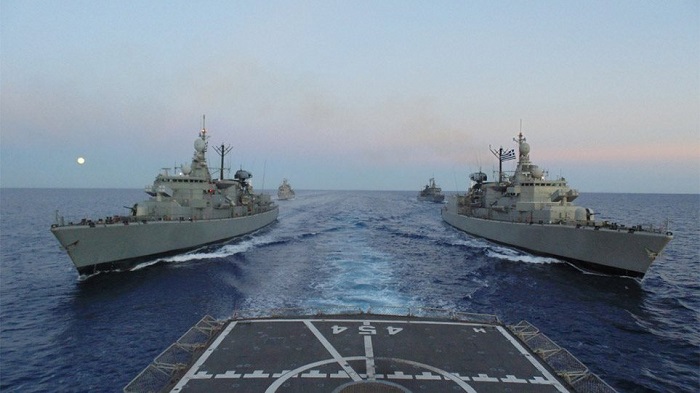 German Chancellor Angela Merkel was instrumental in preventing a military confrontation between Greece and Turkey on Tuesday evening, according to German media reports.
According to the newspaper Bild, Navy ships and fighter jets from both countries were on standby, after Ankara’s decision to send a research vessel off the Greek island of Kastellorizo to conduct oil and gas explorations.
However, according to Bild, Chancellor Merkel prevented a possible military conflict between the two countries.
The newspaper, claiming unnamed sources in the German Chancellery, describes in dramatic tones the moments that unfolded after the announcement of the Turkish NAVTEX for the explorations south of Kastellorizo.
It says that 18 Turkish ships had set sail for Kastellorizo and claims that developments were reminiscent of the events of the Cuban Missile Crisis in 1962, with warships from the two opposing countries “flirting” with conflict.

It adds that Greek naval forces were also sent toward Kastellorizo to defend the country’s sovereignty. At noon on Tuesday, the Greek Navy declared a state of alarm.
“All the summer vacations of military personnel were suspended”, the statement read, while the Chief of the General Staff of the National Defense, Konstantinos Floros, hurriedly returned from Cyprus.
As the military situation was escalating, fighter jets were also on standby to intervene. Two F-16 fighter jets from the Turkish Air Force had earlier in the day flew over Kastellorizo, it adds.
“A situation was developing that could have led at any time to escalation between the two NATO countries,” the paper says.
“Then Merkel intervened,” Bild reports, stressing that the German chancellor had last-minute telephone contacts with Turkish President Recep Tayyip Erdogan and Greek Prime Minister Kyriakos Mitsotakis.
The contacts were completed “successfully,” according to the Bild story. The Turkish fleet turned and headed in another direction, it added.
Berlin indeed confirmed that Merkel had telephone discussions with the leaders of Greece and Turkey on Tuesday evening.
Spokeswoman Ulrike Demer would only confirm that Merkel and Erdogan discussed “various issues, especially the situation in Libya and the Aegean and the Eastern Mediterranean, as well as various bilateral issues.”
Asked specifically if the Turkish drilling was a topic of conversation with the Turkish President, Demer acknowledged: “I can confirm that the issue was the Eastern Mediterranean. Our position on the principle of drilling, on the issue of maritime borders and the exploitation of natural resources in the Eastern Mediterranean, is well known. There is also a decision on EU sanctions,” she said.