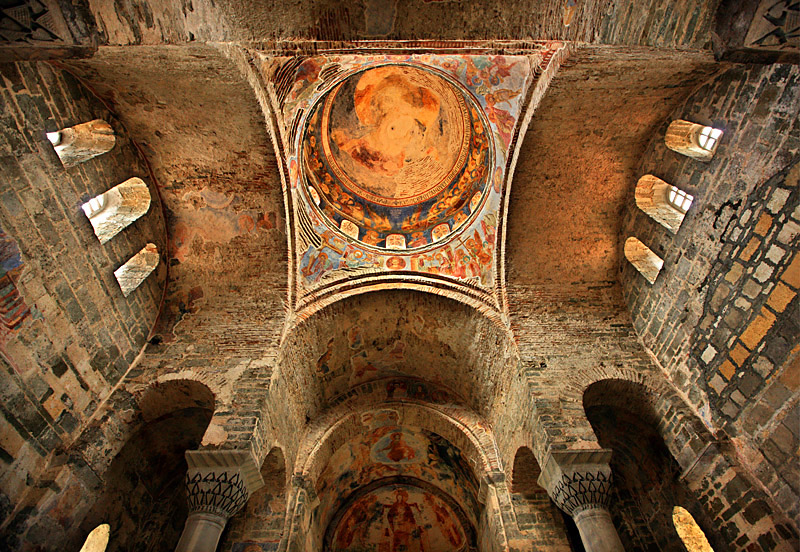 Turkey’s top administrative court, the Council of State, announced on Friday that the 1934 conversion of Constantinople’s Hagia Sophia into a museum was unlawful, paving the way for its reconversion into a mosque despite strong international opposition.
Turkey’s President Recep Tayyip Erdogan then issued a decree to formally declare Hagia Sophia as a mosque, minutes after the Council of State annulled the 1934-dated decision.
Erdogan’s decree cited the Council of State’s verdict as the basis of his move for the transfer of the powers concerning the use of the Hagia Sophia to the Directorate of Religious Affairs (Diyanet).
In a message on Twitter, Erdogan offered his “best wishes” to the Directorate. 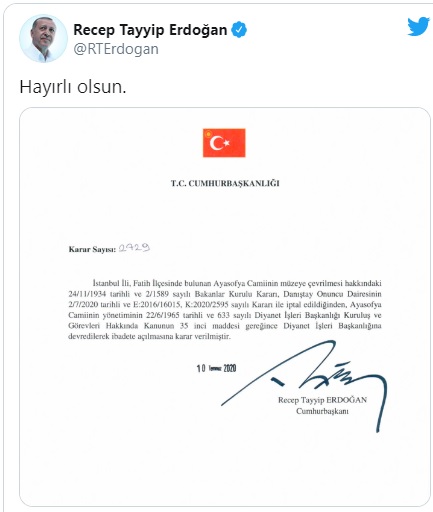 The Turkish daily newspaper Hurriyet reports that crowds were observed to be gathering in front of Hagia Sophia after news broke out on the status change.

Turkish members of parliament from the ruling parties give a standing ovation after speaker reads Erdogan’s decree to turn Hagia Sophia into a mosque pic.twitter.com/HmJmiGXHdU

President Tayyip Erdogan has proposed restoring the mosque status of the sixth-century UNESCO World Heritage Site, which was central to the Christian Byzantine empire and is now one of the most visited monuments in Turkey.
The move has sparked international outrage, as well as strong condemnation from religious figures, including Ecumenical Patriarch Bartholomew, the leader of some 300 million Orthodox Christians worldwide, who said a conversion would disappoint Christians and “fracture” East and West.
These are considered especially brave words since the Patriarch’s seat is still within the city of Istanbul.
The head of the Russian Orthodox Church, Patriarch Kyrill of Moscow, said turning the priceless edifice back into a mosque would “threaten Christianity.”

Ambassador Sam Brownback, who serves as the US Ambassador of Religious Freedom, urged Turkey recently to abandon plans to reconvert the sixth century monument into a mosque.
“Hagia Sophia holds enormous spiritual and cultural significance to billions of believers of different faiths around the world,” Brownback said in a tweet two weeks ago.
“We call on the Government of Turkey to maintain it as a UNESCO World Heritage site and to maintain accessibility to all in its current status as a museum,” the ambassador added.
A number of officials from the nation of Greece, as well as US Secretary of State Mike Pompeo and Greek-American Representative from Florida Gus Bilirakis have also strongly cautioned Turkey to keep the status quo regarding the hallowed building.
The longtime Florida representative says that he has repeatedly spoken to President Trump and Vice President Pence, Secretary of State Mike Pompeo, and members of the National Security Council as well as Ambassador Brownback regarding the “serious threat” of Hagia Sophia’s purported reconversion into a mosque.
“We bring this up all the time,” Bilirakis stated, adding that he also speaks regularly to members of the Foreign Affairs Committee on the subject.

Hagia Sophia remains the symbolic center of the Greek Orthodox faith, even almost six centuries after its fall to the Ottomans. From 537 to 1453, the “Great Church” – as the Byzantines called it – was the eastern heart of Christianity. Full story: https://bit.ly/2HZPGGQ