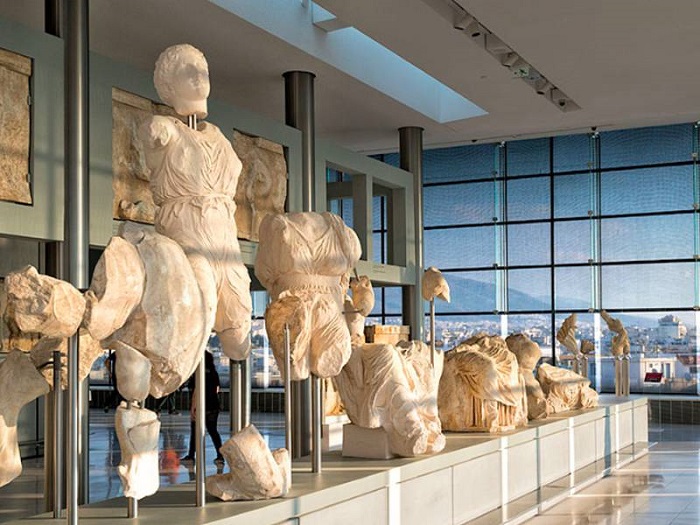 By Paula Tsoni
The new Acropolis Museum in Athens celebrates 11 years of operation on Saturday, June 20, with reduced entry for everyone at 5 euros ($5.6) to all exhibition areas for that day only.
The immense museum, which reopened for visitors on Monday June 15, spans a total  of 25,000 square meters (269,097 feet), 14,000 of which is exhibition space.
Aside from the permanent exhibition, visitors may also enjoy the temporary “Chisel and Memory” presentation, which shows the remarkable craftsmanship of the marble workers to the restoration of the Acropolis monuments. The latter will be showing until September 30, 2020, with free entrance.
Opened in 2009, the new Acropolis Museum faces the monument from the very heart of the picturesque Plaka district. It is ten times larger than the previous museum, which was built on the hill of the Acropolis itself.
Stunning natural light is a focal element of its architectural design, with its creators aspiring to create a simple and precise museum with the mathematical and conceptual clarity of ancient Greece.
As explained on the Museum’s website, the visitor’s route through the building forms “a clear three-dimensional loop, affording an architectural promenade with a rich spatial experience that extends from the archaeological excavations to the Parthenon Marbles and back through the Roman period.”
On weekends, visitors are also given the opportunity to wander through the archaeological excavation which stretches underneath the Museum. Guided tours through the daily life of the people who lived around Acropolis Hill for over 4,500 years begin at 11 a.m. in English and 1 p.m. in Greek.

The new Acropolis Museum, which first opened its doors on June 20, 2009, is considered one of the greatest museums in the world. This is not only in terms of its exhibits, all from the nearby Acropolis, where western civilization was born, but also because of its location and brilliant architecture. Full story: https://bit.ly/2KtpB4b