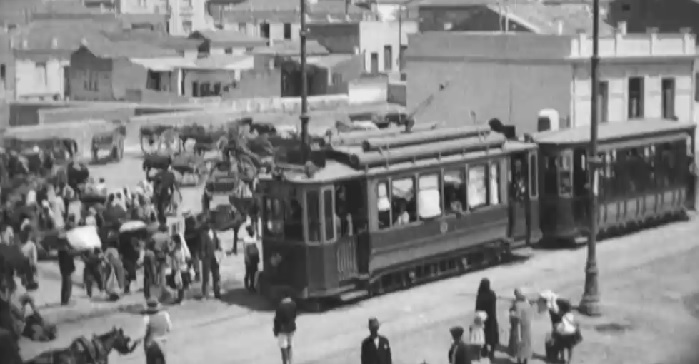 A rare silent movie of the Athens tram in the late 1920s was recently digitized by Greek state television (ERT) and was released on Tuesday.
The astonishing footage, which dates from 1929, shows a two-carriage tram crossing the Koukaki neighborhood of the Greek capital. In the background one can see the Acropolis. A large crowd of shoppers is shown at the local open market, buying groceries, fruit and other goods.
Horse carts are prevalent as they were still the main means of transportation at that time.

According to @theiosthanassis, the tram was going along the Athens-Faliro route. The twitter user also spotted a house which still stands today almost one century later.

You can watch the entire digitized film at ERT by clicking here.
The Athens tramline began its operations in 1882 using horse-drawn tramways. After 1908, the metre gauge tram network was electrified and was extended to 21 lines.
The original Athens tram system ceased operations in 1960 and was replaced by trolleybuses and motorbuses. Trams were relaunched in July 2004, just a few weeks prior to the Athens 2004 Olympic Games.