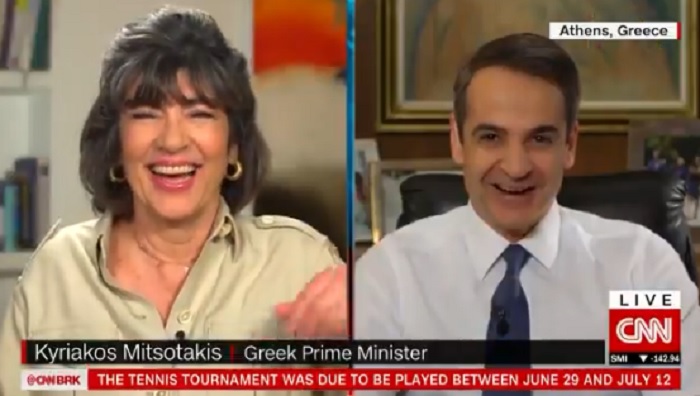 Greek PM Kyriakos Mitsotakis offered some advice to Brazilian President Jair Bolsonaro’s continual underestimation of the coronavirus threat during an interview with CNN’s Christiane Amanpour on Wednesday.
Mitsotakis was responding to a question by the veteran CNN anchor, who had mistakenly upgraded Greece to be a member of the G20 group. She had asked what the Greek PM would say to Bolsonaro when he would meet him at a G20 meeting.
Mitsotakis replied “I wish Greece would become a member of the G-20 very, very quickly, but we are not there yet.”
He continued on, saying that (if Greece was a G-20 member) “I would tell him he is making a huge mistake. This virus spreads like wildfire and there is one way of stopping it: by social distancing and telling people the truth.”
“I don’t now if Brazil’s climate allows us to make different assumptions, but as leaders we have responsibility to our citizens to tell the truth,” Mitsotakis stated.
Bolsonaro, a far-right populist, has grown increasingly isolated in Brazil over his belief that keeping the economy running is more important than strict quarantine measures. He has been meeting people up and down the country, shaking hands and ignoring pleas by state governors, public health ministers and even his own Health Minister, Luiz Henrique Mandetta, to change track.
By contrast, Greece was among the very first European countries to impose strict limits on personal movement and institute a complete lockdown on schools, universities and shops, among other entities.