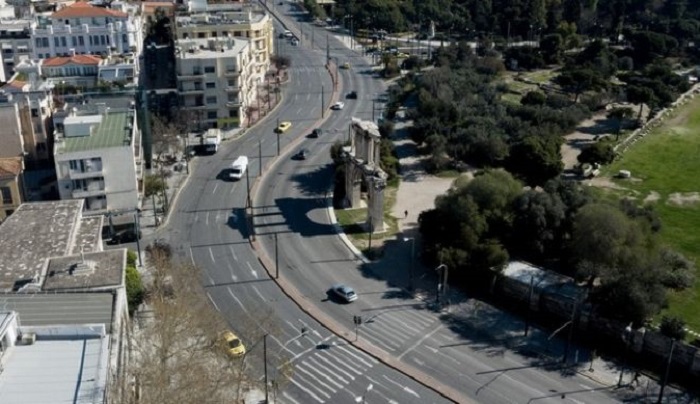 Greece went under lockdown at 6:00 a.m. on Monday to prevent further spreading of the coronavirus in the country. All unnecessary movement outside one’s own home is now banned. The government has issued strict guidelines on exactly who and how one can venture outside their property.
The number of Covid-19 coronavirus fatalities in Greece increased to 17 on Monday. A total of 94 new coronavirus cases were officially recorded on Sunday, bringing the total of confirmed cases in Greece to 624.
At least 339,000 people have contracted the novel coronavirus globally and over 14,700 have succumbed to the virus, according to a running tally by Johns Hopkins University.
Technology giants Microsoft and Bing have created an interactive map, on which you can select areas and see active, recovered and fatal cases of coronavirus infections. You can also see results by country, along with useful information on the disease. View it here.
Updates on Monday
21:00: Great Britain’s Foreign Office has urged more than a million Britons abroad to return to the UK immediately.
20:35: The European Union agreed to limit all spending limits on its member-states’ national budgets to offer countries the chance to fight coronavirus. This means that the EU member-states are able to spend ”whatever it takes” to boost their economies and help their national health systems.

We are proposing the activation of the general escape clause of the Stability and Growth Pact.
This will allow EU governments to support everybody – their healthcare systems, staff and the people so severely affected by the #COVID19 crisis.

18:12: Greece records 71 new cases. The total number has now risen to 695. 114 people are hospitalized. 35 are in serious condition. A total of 17 people have died so far.
17:26: The Queen of England is planning an address to the nation in the coming days, according to reports from British newspapers. If she does release a televised message, this will be only the fourth time in her reign she will have done so. The last time she did this was in 2002 when the Queen Mother died.
17:24: Greece announces a total of fifty hotels which will remain open across the entire country.
17:20: A European Parliament employee, approximately 40 years of age, has died after being infected by the coronavirus.
17:12: Greece’s Aegean Airlines announced that it will cease all its flights abroad, from March 26 to April 30, 2020. Only a small number of weekly flights will continue to operate, between Athens and Brussels.
17:10: Germany’s Deutsche Welle reported that the death toll in that country has now exceeded 100.
17:05: A cabinet meeting chaired by Prime Minister Kyriakos Mitsotakis is scheduled for Tuesday at 11:00 EET, with the spread of the coronavirus as the main issue on the agenda.
16:10: The number of confirmed coronavirus cases has now reached 30,000 in Spain.
15:35: The Greek authorities issued a national call for volunteers to assist the National Health System of the country in its ongoing effort to tackle the coronavirus pandemic on Monday. This move has sparked mixed reactions on social media, with the general public being split about the volunteer appeal. Full story.

15:29: The US Federal Reserve announced on Monday an unlimited expansion of bond purchasing programs in the country to assist the American economy.
14:55: Greek Premier Kyriakos Mitsotakis published a video informing the public about the ways in which they can now legally venture outdoors, following the nationwide lockdown.

14:50: The Greek Embassy in London urges Greek citizens who still wish to return to Greece to register their interest in doing so on an online form.

14:30: According to an AFP tally, more than one billion people around the world have now been asked to stay home in line with mandatory or recommended measures rolled out by governments trying to slow the tide of the pandemic.
14:15: Doctors and nurses at Larissa’s general hospital gathered together to send the message “We are staying here for you, You stay at home for us.” 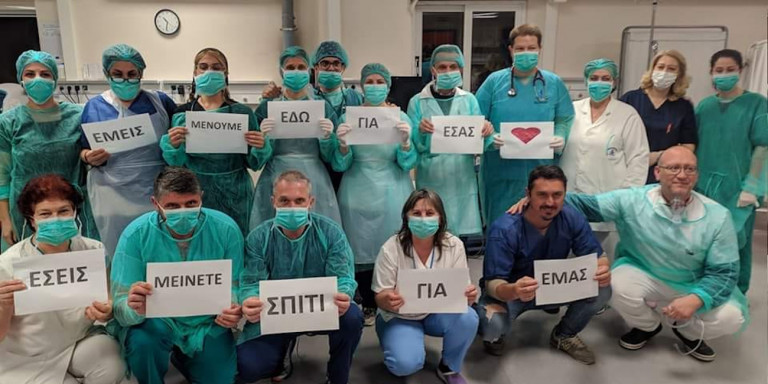 14:05: Orthodox priests in a village near Thessaloniki took drastic action in order to conduct the Liturgy on Sunday, as church services have now been banned by the authorities. They scaled up a steep hill while holding a wooden cross and, with the aid of speakers, conducted the Liturgy for a handful of faithful watching from afar.
Sunday marked the celebration of the Exaltation of the Holy Cross in the Orthodox world. 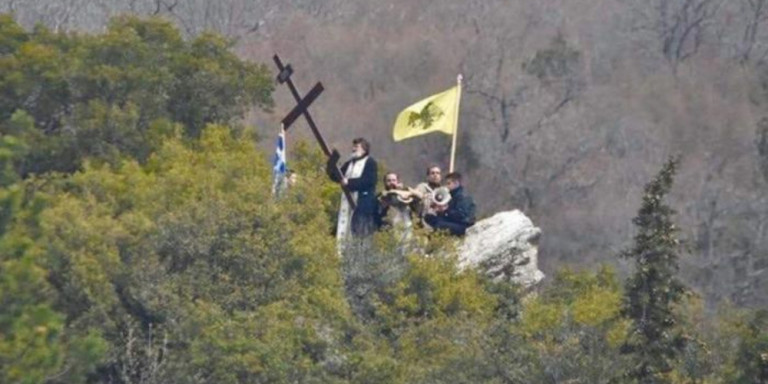 14:00: Greek PM Kyriakos Mitsotakis tweeted the following message on Monday: “From today, the strict restrictions on circulation apply throughout Greece. Let each home become a fortress of life and let our doors stay closed to the coronavirus. We stay healthy, we stay safe, we stay home. For more information visit forma.gov.gr”.
13:15: The number of arrests for the violation of measures announced by the Greek government against the spread of coronavirus increased again on Monday, reaching 250 in total since March 12. Most of these concerned the illegal operation of hairdressing salons, cafeterias, coffee shops, restaurants and tavernas.
12:50: The coronavirus death toll in Spain has reached 2,182, the government has announced, after 462 people passed away in the past 24 hours.
12:10: “We must all understand that the curfew is not a punitive measure but a protection measure,” said Hellenic Police spokesperson Theodoros Chronopoulos in statements to the Athens-Macedonian News Agency on Monday.
Chronopoulos also clarified that on Monday, the first day of the measure, police will give recommendations and advice and will provide information to citizens, but beginning on Tuesday, he said “there will be no leniency for those that do not assume their share of responsibility.”
11:55: A 78-year-old man died at Sotiria Hospital in Athens, marking the second fatality in Greece over just the last few hours. Earlier, a 64-year-old man had died at the Patras Rio hospital. The total number of fatalities has increased to 17. Full story here.
11:40: Greece on Monday imposed a ban on all flights from and to the United Kingdom and Turkey. With regard to Turkey, it was decided to also temporarily restrict maritime, rail and road connections. Greek citizens in Turkey, however, will be allowed to return home. Full story here.
11:30: New York native and legendary actor Robert De Niro posted a video of himself on Twitter urging New Yorkers to stay home during the pandemic. The video was shared by NYC mayor Andrew Cuomo.

11:20: A 64-year-old man passed away at the Patras Rio hospital on Monday, becoming the sixteenth fatality from the coronavirus pandemic in Greece.
10:45: Footage from London shows metro stations packed with people on Monday morning.

Dear @BorisJohnson @SadiqKhan – plenty of non critical workers on my tube – as a teacher on my way to work this is terrifying – people aren’t getting the message #tfl #london #ukcoronavirus @piersmorgan pic.twitter.com/DBoAHniFQq

10:35: European markets opened approximately 3 to 4 percent lower on Monday, with the German Dax and the French CAC 40 both down sharply.
These drops follow on from losses in Asia, and a big drop in US futures. Dow futures fell 5%, while the Australian benchmark — the S&P/ASX 200 — closed 5.6% lower.
10:30: 110 Greeks were repatriated from Italy late on Sunday. After arriving at the port of Patras, they were transferred to Athens and Agrinio by buses provided by the fire service. The bus drivers were wearing special protective suits and masks to guard against infection.
10:00: The number of confirmed coronavirus cases in Germany has risen to 22,672 and 86 people have died from the disease, according to a tally released on Monday by the public health agency.
09:55: Nicholas A. Christakis, Sterling Professor of Social & Natural Science at Yale University, had this message regarding the Greek lockdown:

A note to my fellow Greeks. @kmitsotakis properly closed the schools and made other announcements to reduce social mixing. You should not gather outside. This is not a holiday. Stay home! Go out once a week for essentials. Do not touch friends. Den thelo na klapso tin Romiosini.

09:45: Tech giant Facebook has donated 720,000 masks to US health workers, its CEO Mark Zuckerberg has said. Zuckerberg said the masks had been bought in case the US wildfires continued, and that it was the company’s emergency reserve supply.
09:30: In Greece, only one passenger in addition to the driver is now allowed in private vehicles. It is not clear yet whether this restriction applies to taxis.
09:20:

Some much needed comic relief through these dark times. This man in Italy insists on going out to get coffee. Watch the video to see where he goes 😂 pic.twitter.com/4qV6pGJUgn

09:00: The Greek police have conducted checks since early in the morning to see if citizens are complying with the new measures on traffic restrictions.


08:30: Doctors in Spain, with tears in their eyes, describe how people over 65 must now have their respirators removed in order to give them to younger people who are also suffering from the virus.

#Spain "Doctors in #España🇪🇸 with tears in their eyes tell how people over 65 must have their respirators removed to give it to the younger people suffering . Seniors are sedated so they don't suffer. " #CoronavirusPandemic #CoronaVirusUpdates
pic.twitter.com/rClbMGD353

08:15: In Turkey, authorities announced that nine more people had died by Sunday night, bringing the country’s death toll to 30. Health Minister Fahrettin Koca said on Twitter that 289 people tested positive for Covid-19 on Sunday. The total number of confirmed cases in the country is now at least 1,236.

08:00: Disgraced Hollywood producer Harvey Weinstein has tested positive for the virus. Weinstein, who was found guilty of rape and sexual assault last month, is now being held at the Wende Correctional Facility in upstate New York.
07:45: Speaking to lawmakers on Monday, Japanese Prime Minister Shinzo Abe said postponing the 2020 Summer Olympics is a possibility. This is the first time Abe has changed his staunch public position that the Olympics would start on July 24 as scheduled.
07:30: Donald Trump said he had activated the National Guard, the reserve forces of the American military, to help the hardest-hit states, including California, New York and Washington, grapple with the coronavirus outbreak.