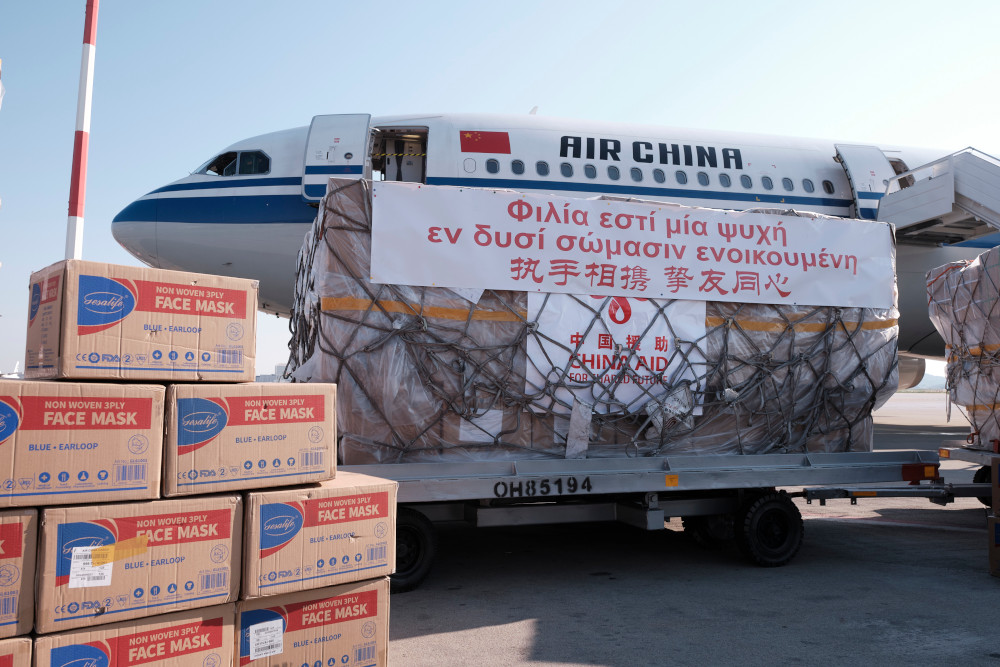 A shipment of medical supplies provided by the Chinese government to Greece, at the urgent request of the Greek government, arrived in Athens on Saturday, via the Air China CA 863 flight.
The aid, weighing about 8 tons, includes 550,000 surgical masks and other medical supplies such as protective equipment, glasses, gloves and shoe covers.
The Chinese Ambassador to Greece, Zhang Qiyue, presented the medical supplies from the Chinese Government to Greece’s Minister of Health, Vassilis Kikilias, at Athens International Airport. State Minister Georgios Gerapetritis and Deputy Foreign Minister for European Affairs Miltiadis Varvitsiotis were present at the reception.
The Chinese Ambassador emphasized that the collection and transportation of these medical supplies took place in an eight-day period, at a time when China was still under immense pressure due to the coronavirus pandemic and availability of medical supplies was still scarce.
Additional medical supplies, weighing about 10 tons, donated by Chinese companies and organizations arrived on the same flight and were also handed over to the Greek government.
Ambassador Zhang referred to Aristotle’s words: “What is a friend? Friend means the single soul that lives in two bodies, “saying that” the difficult times reveal true friends “and that” China and Greece are working closely together in the fight against Covid-19, which confirms once again the excellent relations and friendship between the two peoples.”
The Aristotle quote “Friendship is one soul residing in two bodies” was written in Greek and Chinese on a sign placed on one of the containers.
The Chinese official thanked again the Greek government for its strong support during China’s battle against Covid-19, as evidenced by letters from former Greek President Prokopios Pavlopoulos and Prime Minister Kyriakos Mitsotakis to Chinese President Xi Jinping.
Ambassador Zhang also congratulated the Greek government on its efforts and measures, describing them as “timely and dynamic”. He added that “Chinese companies such as Cosco Shipping, State Grid, Bank of China, ICBC, Huawei, to name just a few, have contributed in their own way to Greek society. More donations arrive. And we will do our best to help our friends in Greece.”
“With solidarity and cooperation, we will overcome this challenge together,” Ambassador Zhang concluded.