Greece Celebrates 72 Years Since the Dodecanese Islands Joined the Country

By Nick Kampouris
March 7, 2020
Facebook
Twitter
WhatsApp
Linkedin
Email
The Dodecanese — the island archipelago which literally means ”The Twelve Islands” — officially joined their motherland of Greece 72 years ago today.
On March 7, 1948, only a few years after the end of World War II, the islands of Rhodes, Kos, Kalymnos and other scenic gems entered a new chapter in history by becoming the last areas to join Greece after the War of Independence in 1821.
The Dodecanese have long been known as some of Greece’s most idyllic destinations; however, not so many know that these stunningly beautiful, fairytale-like islands were actually Italian before becoming Greek.
Many sipping their ouzo or Greek coffee there would be surprised to know that these sunny havens became part of the Greek state only halfway through the twentieth century.
It was only in 1948, after having endured centuries of occupation by different powers and a campaign to strip them of their Greek identity, that the islanders were finally able to join with their fellow Greeks.
The fifteen main islands and 93 islets — not just twelve as their name suggests — of the modern Dodecanese island chain have always been known as a cultural and political crossroads. 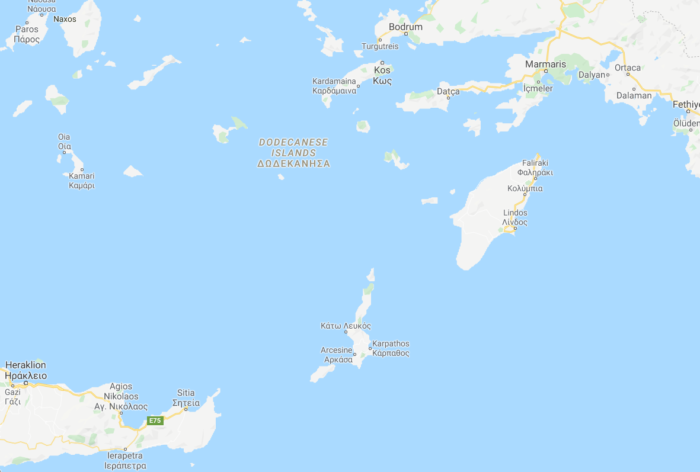 Ever since antiquity, the islands have had many differing forms of government, even including repressive military occupation.
After the Ottoman conquest of 1522, the largest Dodecanese islands, Rhodes and Kos, came under direct Ottoman rule, while the rest had different political relations with the new empire.
Using their self-government to flourish economically, Ottoman attempts to rescind these privileges in the nineteenth century pushed most of the islanders to favor union with the emerging independent Greek state.
However, the London Protocol of 1830, which officially recognized Greek independence, left out the islands, most of which — apart from Castellorizo near Turkey — later came under Italian occupation during Italy’s war with the Ottomans.
In 1923, Italy annexed the islands under the Treaty of Lausanne and later, Mussolini began a policy of Italianization, trying to strip the idyllic islands of the influence of their Greek culture, language and ancient traditions, making them part of his Fascist regime.

Rome also tried to implement a resettlement policy in the archipelago, and by 1936, a total of 16,700 Italian nationals were living on the islands, most of them on Rhodes and Leros.
But even worse was to come, as fascist racial laws were enforced, and totalitarian architectural projects — sometimes using forced Greek labor — were undertaken as part of Mussolini’s efforts to Italianize the islands.
With a second European war looming, the Dodecanese’s Greek population narrowly avoided conscription since they were technically not full citizens of the Italian state.
However, the Allied attempt to take the Dodecanese without air cover proved to be a disaster, and Nazi Germany maintained its tight military grip on the islands all the way to the end of the Second World War.
This military occupation led to the deaths of most of the islands’ Jewish community, with only 1,200 individuals out of its pre-occupation population of 6,000 successfully escaping to Turkey.
After Germany’s defeat, the islands passed into British hands and in 1947 a Treaty of Peace between Italy and the victorious powers finally transferred them to Greece, along with $105 million in reparations.
Ever since that time, the Dodecanese have been part of Greece, despite the occasional historical hangover showing their once-independent status — for example, amateur radio still treats the islands as another jurisdiction, giving them a different call sign from mainland Greece.
Last year the Greek Parliament held a special session to mark seven decades since the Dodecanese islands’ joyful reunification with the rest of the country.