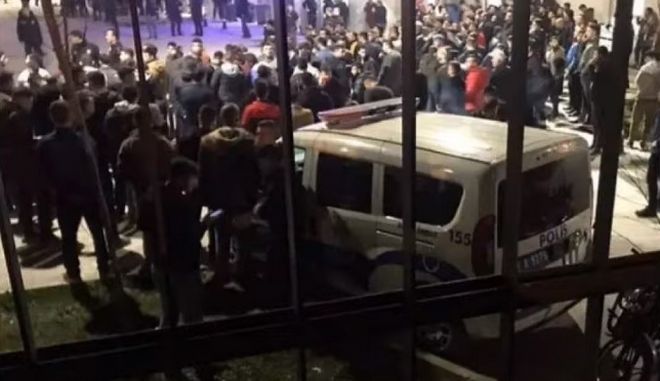 President Recep Tayyip Erdogan likes to flex his muscles in front of Europe, Greece, Cyprus and everyone else he believes can give something that Turkey wants. Or when Turkey does something which breaks international law.
He also likes to threaten the European Union and countries he believes are enemies of Turkey. Or perhaps he is just trying to convince his constituents that he is a great victorious general who can lead his armies to defeat Turkey’s perceived enemies.
By now it is clear that Erdogan’s favorite “diplomatic” tool is sheer blackmail. And the 3.5 million Syrian refugees Turkey houses currently is a convenient playing card for him.
Since March of 2016, when the agreement between Ankara and the EU concerning the return of refugees from Europe back to Turkey was signed, the Turkish president has often threatened that he will “open Turkey’s borders” for more refugees to cross over into Europe.
And this would happen via Greece, of course.
Whether it was a reaction to European sanctions against Turkey or Cyprus’ drilling for hydrocarbons in its own rightful exclusive economic zone, Erdogan always held the blackmail card, threatening to open the gates for countless refugees and migrants to cross over.
The Turkish President often uses refugees as pawns to blackmail Greece when challenging Greece’s maritime borders and the sovereignty of certain Aegean islands, or when he wants to drill for hydrocarbons in Greek waters.
And again, when he signed the completely discredited deal with Libya that delineated sea borders between the two countries, ignoring the fact that Crete lies in between those nations.
Now the escalation of Turkey’s military involvement in Syria brings back Erdogan’s favorite blackmail tool to the fore. On Thursday, 33 Turkish soldiers were killed in an air strike by Syrian government forces in Idlib, which served as a good opportunity for Erdogan to use the migrant card.
A senior Turkish official told Reuters that after Idlib, Turkey would no longer stop Syrian refugees from reaching Europe because it is impossible to restrain the flow. Hundreds of refugees and migrants have already gathered at the Evros border, just waiting for an opportunity to cross over.
Of course, it is humanly impossible that these individuals could have fled from Idlib in such a short time.
Now Erdogan’s spot is even tighter, as the Russian Defense Ministry is claiming that the Turkish soldiers killed were among the members of Hayat Tahrir al-Sham, an organization previously known as the al-Nusra Front, which Russia and other countries have outlawed as a terrorist organization.
It is likely, then, that Erdogan will open Turkey’s borders for an indefinite number of migrants and refugees to cross over. Time will soon tell.