The Parthenon Marbles, currently held at the British Museum, are by far the most famous of all the Greek ancient antiquities found outside the country and are surely the most controversial. But many other, equally magnificent pieces of Greek art are displayed in various museums around the world, and sometimes we can lose sight of these priceless treasures in our focus on the lost Marbles.

The Venus de Milo, at the Louvre Museum in Paris, France
Discovered on the island of Melos in 1820, the Venus de Milo is one of the most exquisite examples of ancient Greek sculpture. Immediately recognizable by her missing arms, she remains shrouded in mystery.
Her arms have never been discovered to this day, and there is a healthy debate about who the sculpture portrays — is it Aphrodite, who was often shown half-naked, or the sea goddess Amphitrite, who was venerated on Melos?


This vase is the finest object in the first collection of Greek vases assembled by Sir William Hamilton and sold to the British Museum in 1772. The figures depicted on the vase are divided into two zones. The upper zone illustrates the abduction of the daughters of Leukippos, with Aphrodite conniving in the abduction, while the lower zone depicts Herakles performing his final labor.

Athlete Holding a Discus, at the Louvre Museum, Paris, France
This discus thrower is a reproduction of a lost bronze original, created by the Greek sculptor Naucydes at the beginning of the fourth century BC. The athlete is portrayed adjusting his position, at the very instant before the throw.
This statue was part of the collection of antiquities at the Villa Borghese in Rome, where it stood with three other athletes around “The Gladiator,” which also entered the Louvre at the same period. This occurred in 1808, when Napoleon Bonaparte purchased the collection from his brother-in-law, Prince Camillo Borghese.

The Vatican Amphora, at the Vatican Museum, Vatican City, Italy
Widely regarded as Exekias’ masterpiece, this famous amphora depicts Achilles and Ajax seated and playing dice; and you can read out the points won — four and three respectively — as indicated by the inscriptions that emerge from their mouths as if in a comic strip.
The two are portrayed fully dressed for battle, with spears and body armor.

The Resting Satyr, at the Capitoline Museums, Rome, Italy
The Resting Satyr, or Leaning Satyr, is attributed to the ancient Greek sculptor Praxiteles. In ancient Greek Mythology, satyrs are male companions to Dionysus and are known for their love of wine, women, and playing music on their pipes or flutes.
There are 115 similar sculptures of satyrs featured at museums around the world but the very best example of this subject can be found at the Capitoline Museum in Rome.


This bronze sculpture, a depiction of a youthful Apollo, is engulfed in controversy about who its actual creator was. The sculpture is currently considered to be a product of Praxiteles’ workshop, and if true, this is the only large Greek bronze statue which can be attributed to a Greek sculptor. 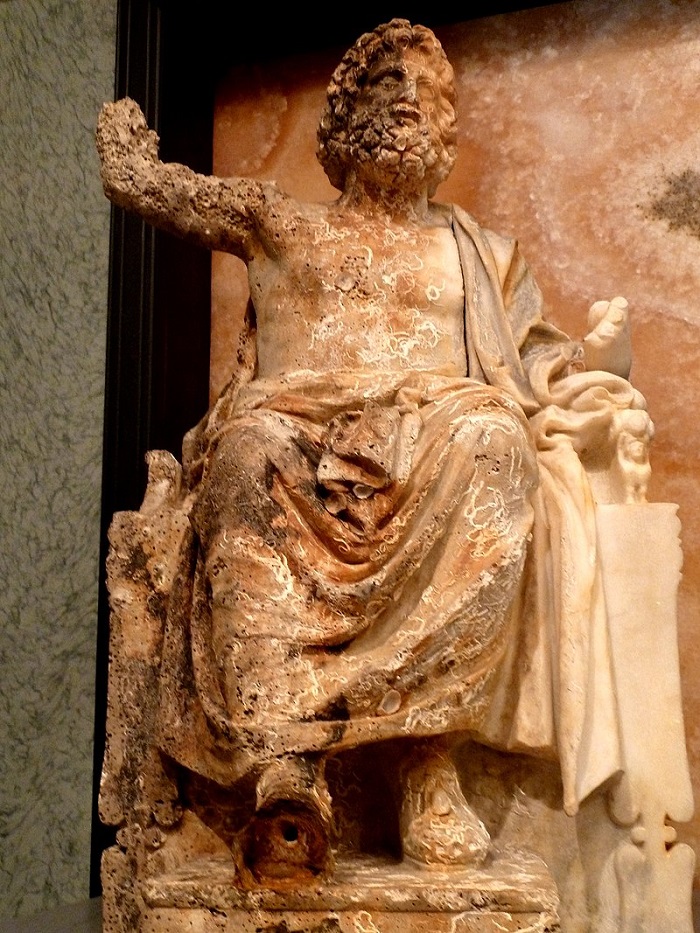 Statue of Zeus Enthroned, at the National Archeological Museum, Naples, Italy
Around the year 430 BC this gold and ivory of statue of Zeus was at the center of one of the most important religious sanctuaries in the entire Greek world. Intended for use in the Temple of Zeus at Olympia, it later was considered to be one of the Seven Wonders of the ancient world.
The statue spent a long period of time submerged in the sea before it was subsequently discovered off Campania, Italy. It was returned to Italy in June of 2017 after the J. Paul Getty Museum in California relinquished it after a long battle over its ownership.

Limestone Herakles, at the Metropolitan Museum of New York, USA
Thought to have been sculpted in 530 B.C. – 520 B.C., this statue of Herakles, from Cyprus, was created during the Archaic period. Despite extensive restoration, which unfortunately altered many of its original features, this figure is evidence that Cypriot sculptors were working on a large scale as early as the beginning of the sixth century B.C.

Greek Wedding, at the Rijksmuseum, Amsterdam, The Netherlands
An oil painting on canvas, created by Jean Baptiste Vanmour, c. 1720 – c. 1737, this work shows a Greek bride sitting on a low platform, surrounded by family and friends. The scene shows the bride receiving gifts of gold jewelry and elegant fabrics from her guests.
The painting, which depicts a number of wedding guests, shows how family and friends are an important and indelible part of Greek culture.

Halloumi and Feta may just be the most iconic food products from their respective countries of origin, Cyprus and Greece.
Culture

On a day like this on February 28 1943, Athens was mourning one of the nation's greatest poets: Kostis Palamas had died the day before.
Environment