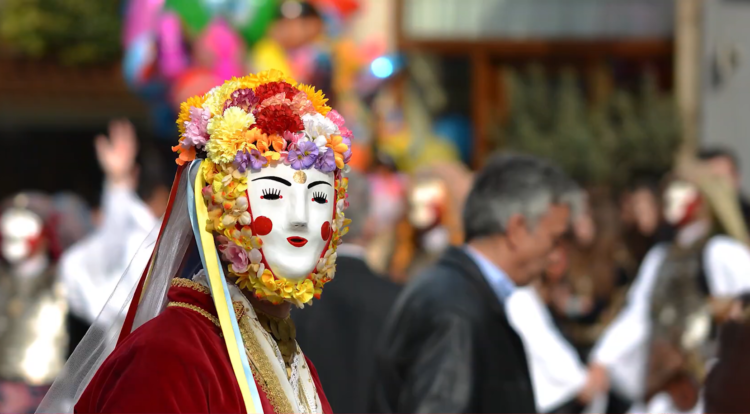 Greece is a country where the annual Carnival season is closely linked to its rich and very ancient folklore tradition.
Dozens of beloved local festivities take place each late Winter across the entire country. However, very few have as deep links with the nation’s ancient and more recent past as the custom of the ”Genitsari and Boules,” or simply ”Boules,” of Naoussa, in northern Greece.
The History

This custom is definitely among the oldest Greek traditions which have managed to survive to this very day.
Folklore experts agree that the festival’s dancing, as well as other elements incorporated into its mystical nature, has elements from ancient Greece — and more specifically, with those linked to rituals honoring Dionysus, the god of wine, pleasure, festivity, madness and wild frenzy.
Apart from these elements, however, the tradition is also deeply linked with Naoussa’s much more recent, bitter struggle against Ottoman rule.
This great Macedonian city has the rare honor of officially bearing the title of ”Heroic” before its name.
The people of Naoussa revolted against the Ottomans in 1822, just one year after the official outbreak of the Greek War of Independence in southern Greece.
However, the brave decision taken by the people of this city, which was a purely Greek and Christian community surrounded by Muslim and Slavic settlements, was answered with unspeakable cruelty by Istanbul.
The proud, beautiful city of Naoussa was attacked and completely destroyed, while most of its Christian male citizens were slaughtered and many of its women and children were sold into slavery.
The tradition of ”Boules” is not only an annual reminder of this profound sorrow, which is indelibly engraved into the city’s old alleyways; it also rekindles the fighting spirit and the will to resist that people from Naoussa have always had in their souls throughout the centuries.
Some of the songs to which the participants dance during the Boules narrate the long struggles and the catastrophe which happened to the city in the nineteenth century, while others celebrate Naoussa’s pride in its heroism.
A Carnival like no other 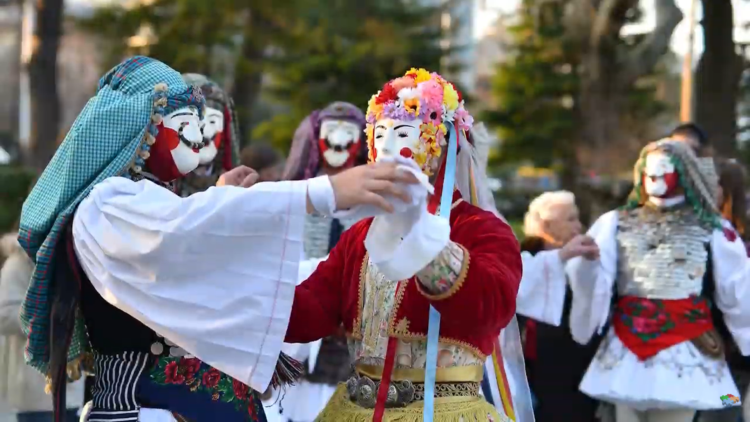 For this reason, the Carnival of Naoussa is completely different from all other Carnival festivities in Greece.
There, along with the contemporary, popular street parties that take place throughout the two weeks of the Carnival season (or Apokria), the city revives this ancient tradition combining the region’s rich ancient Macedonian Greek history with a commemoration of the tremendous heroism of the period of the Ottoman rule.
In one of Naoussa’s most visually-striking customs, young unmarried men dress in a traditional costume which includes the Greek fustanella and other clothing bedecked with silver and jewels, while wearing a unique, handmade mask known as a ”Prosopos.”
This incredibly colorful and unforgettable event, which takes place on the first Sunday of the ”Apokria,” is repeated on the second Sunday, as well as on Ash or Clean Monday, during Holy Week.
This year’s festivities will conclude on the ”Sunday of Orthodoxy,” which this year is on March 8.
Centuries’ old tradition dictates that only young, unmarried men can become ”Genitsari,”  the male players who take part in the dance.
The ”Boula” is the only female figure, but her part is also enacted by a man, who is dressed as a traditional bride.
Groups of these masked young men in traditional costume dance around the old parts of the city, along a designated route which finds its origins back in the very first years of the establishment of the modern city of Naoussa, in the Middle Ages.
These fantastically-attired young men brandish swords and dance to the the emotionally-charged music of the instruments known as the ”daouli” and ”zournas,” re-creating a unique mixture of ancient Greek celebration and vivid memories of the area’s modern fight against the Turks.
The performance always adheres to strict, primarily verbal, rules which have not changed in centuries.
Epilogue
There is no exact way to describe this unique Greek custom. It is not a purely ancient one, nor is it a modern one; it somehow incorporates both these two historical periods of the Greek nation in a commemoration which is a uniquely Greek combination of delirious happiness and terrible sadness.
Rooted in the ancient Greek tradition which celebrated and honored the god Dionysus, and yet re-shaped by the nineteenth century’s struggles against the Ottoman Turks, this unique dance and folklore event dazzles all onlookers with its sweeping emotions.
Lasting from the very early hours of the morning until the darkness of the evening, it is a unique experience which every visitor to Macedonia during this time of the year simply must witness and take part in.
© Newspaper WordPress Theme by TagDiv