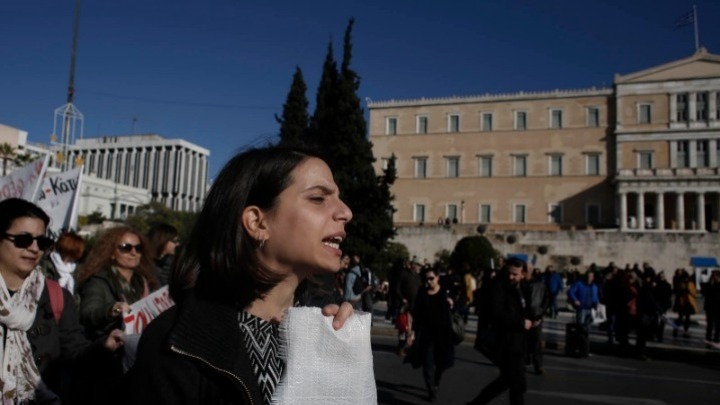 Traffic in parts of the Greek capital came to a standstill on Tuesday as Greek transport workers joined a 24-hour public sector strike over pension reforms.
Buses, trolleys, trams and metro transportation will be out of operation for the day. Workers from the Athens suburban railway Proastiakos and intercity trains announced late on Monday that they will also participate in the strikes.
Public hospitals will operate on skeleton staffs, as the Panhellenic Federation of Public Hospitals Workers (POEDIN) is also taking part in the protests.
Most ferries at the ports of Piraeus, Lavrio and Rafina will remain docked on Tuesday, as five seamen’s unions are joining the strike, led by the Panhellenic Union of Merchant Navy Seamen (PENEN). Passengers are advised to contact port authorities and tourist agencies for details.
Protesters marched onto Syntagma Square in front of the Parliament building, where the contentious legislation will be voted on by lawmakers.
Workers’ unions claim that the bill “privatizes social security and pushes thousands of young workers to seek private insurance.”
They also accuse the government of reneging on a promise to rescind all bailout-mandated cuts.
“The bill is nothing less than a continuation of the bailout laws that were voted in 2010-2019 and resulted in pension cuts of 20% up to 60%,” said ADEDY, the country’s largest public sector union, in a statement.
Greek Labor and Social Affairs Minister Yiannis Vroutsis said that the bill, supported by two scientifically-documented studies, “guarantees the sustainability of the social security system until 2070.”
According to the Minister, the bill is based on simplicity, flexibility and freedom.
“It creates an attractive social security system that cultivates the social security conscience of all and offers special provision to the young, working mothers, farmers, people with disabilities and to large families,” he said, adding that there will be no reductions of pensions.
“The most favored will be the current and future workers as everyone will see an increase in their pension if they complete 30 years of working life,” Vroutsis clarified.
Successive governments have attempted to overhaul the pension system, whose previously generous handouts are seen as one of the causes of the decade-long Greek debt crisis.
Chronic overspending and the inaccurate reporting of the budget deficit nearly bankrupted Greece in 2010 and required three successive bailouts by the European Union and the International Monetary Fund.
In return for billions of euros in rescue funds, Greece had to adopt unpopular austerity reforms and severe pension cuts.