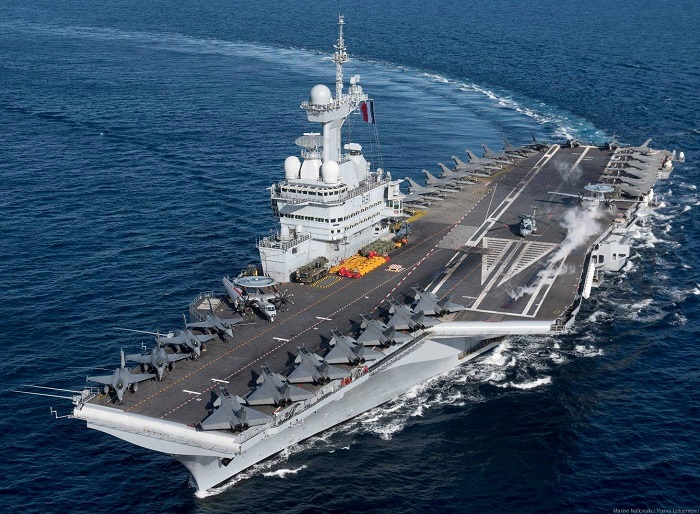 France further intensified its strong military presence in the Eastern Mediterranean on Wednesday, in an effort to send a clear message of military might to all those who provoke Cyprus regarding its sovereign rights in the region.
The flagship of the French Navy, aircraft carrier Charles de Gaulle, escorted by six accompanying vessels and carrying a number of Rafale fighter jets, military helicopters and drones, sailed to block number eight in Cyprus’ Exclusive Economic Zone.
Block 8 has come under the spotlight in the last two weeks since it is the area where Turkey’s state-owned ”Yavuz” drillship is blatantly violating Cyprus’ continental shelf, drilling in search for natural gas resources.
Turkey, however, is not only violating Cyprus’ sovereign rights in the area but also infringes upon the rights of French and Italian energy giants ”Totale” and ”ENI” which have legal licenses granted by Nicosia to conduct drilling there.
Diplomatic tensions between Paris and Ankara have grown significantly over the recent period since the two nations are on opposing sides on many geopolitical developments in the broader region.
The gigantic crown jewel of the French Navy did not just pass by block number eight, but instead has continued to remain there, sparking anger in Turkish diplomatic officials.
According to the French plans, the aircraft carrier will later go to the port of Limassol in Cyprus, afterward leaving the area to head toward the Straits of Hormuz.
This move comes after the recent announcements by French President Macron and Greek Premier Mitsotakis that the two countries will soon work toward forming a defense pact which will further strengthen the already-excellent relations between Athens and Paris.
United States’ Presence in Cyprus
Meanwhile, US Assistant Secretary of State for Energy Resources Francis Fannon referred on Wednesday to the importance of the “3+1” mechanism for energy cooperation in the Eastern Mediterranean, established by Cyprus, Greece, Israel and the United States during a recent visit to the island.
Assistant Secretary Fannon also called on all parties to refrain from taking any provocative action which could create further instability.
The American officials, along with Cypriot Energy Minister George Lakkotrypis, addressed this morning’s 3+1 technical group meeting held in Nicosia.
In statements released concurrent with the meeting, Fannon maintained that ”this 3+1 construct is an important vehicle to facilitate that level of cooperation among states.”
With information from CNA