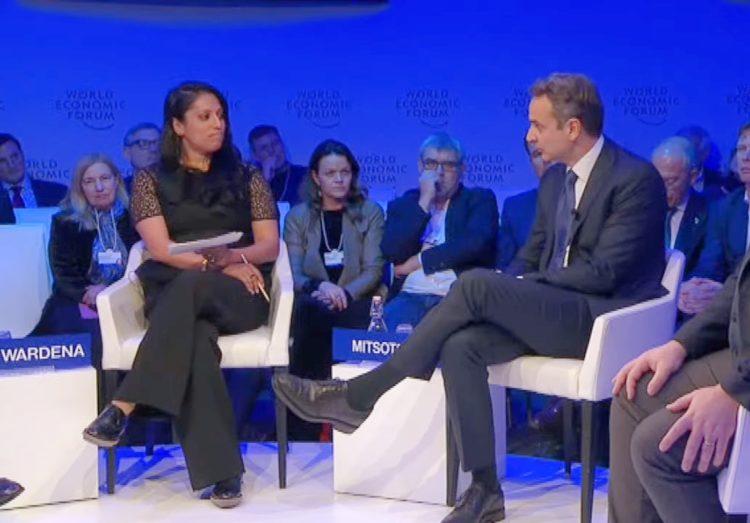 Greek Prime Minister Kyriakos Mitsotakis is attending the World Economic Forum in Davos, Switzerland, along with most other world leaders this week and he participated in two separate panels there on Thursday.
The first was about the so-called “Green New Deal” and the second was a discussion with Harvard and Stanford University History Professor Niall Ferguson.
During the second panel discussion, Mitsotakis explained how Greece, Cyprus and Israel are planning to bring natural gas to the European Union through the EastMed gas pipeline.
”We don’t need Turkish permission to do that,” Mitsotakis noted emphatically, referring to Turkey’s remarks that the proposed pipeline route passes through its own continental shelf.
He reiterated that Greece’s cooperation with other states does not intend to exclude Turkey, but he also added, ”at the end of the day, one has to accept that we have to play by the rules.”
On the issue of Libya, the Prime Minister reiterated that there would be no political solution on which the EU and Greece could agree unless the Saraj – Turkey memoranda are voided.
“I was very clear to Angela Merkel that it was a mistake that Greece was not invited to Berlin, stressing that Greece is the closest neighbor to Libya from a European perspective,” the Prime Minister said from the Davos conference.
“Libya and Turkey have no maritime borders and the treaty they signed does not take into account the rights of our islands,” Mitsotakis reiterated for the panel participants.
The Greek leader also referred to a number of other issues during his two panel discussions, ranging from the refugee and migrant crisis to the climate debate.
The Greek Premier said that Turkey is utilizing the refugee and migrant issue to place pressure on Greece and the rest of the EU, highlighting the extremely difficult situation that the Eastern Aegean islands are currently experiencing.