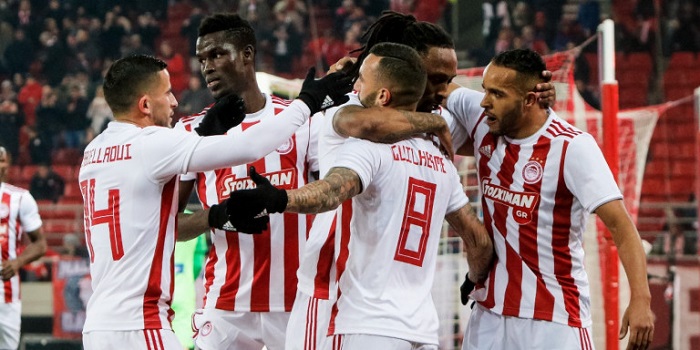 Olympiacos and PAOK continued their impressive march in the Greek Super League confirming once more that this year’s title is a two-horse race.
Olympiacos secured a 4-2 victory over Aris in an entertaining North vs. South derby clash at the Georgios Karaiskakis Stadium in Piraeus.
Two quick-fire goals in as many first-half minutes from Guilherme and Youssef E-Arabi set Olympiacos on their way, before Aris’ Lindsay Rose replied with a header to reduce the deficit seven minutes after the half-hour mark.
Aris’ attacking style though attractive, left them exposed at the back and Olympiacos punished them twice in the second half to move 4-1 ahead courtesy of goals from Omar Elabdellaoui and Mathieu Valbuena. The visitors again reduced the deficit seven minutes from time through Frenchman Nicolas Diguiny.

PAOK defeated Asteras Tripolis 3-1 without having to work particularly hard. Karol Swiderski, Dimitris Pelkas and Lazaros Lambrou were on target for PAOK, before Mark Fernandez pulled one back for the visitors.

AEK beat Larissa 3-0 in Athens courtesy of goals by three Portuguese players: Andre Simoes, Nelson Oliveira and Helder Lopes. AEK remained 13 points off the pace, and six above Panathinaikos that beat Xanthi 1-0 on the road to rise to the fourth spot for the first time this season. Former Manchester United striker Federico Macheda scored for the Greens. 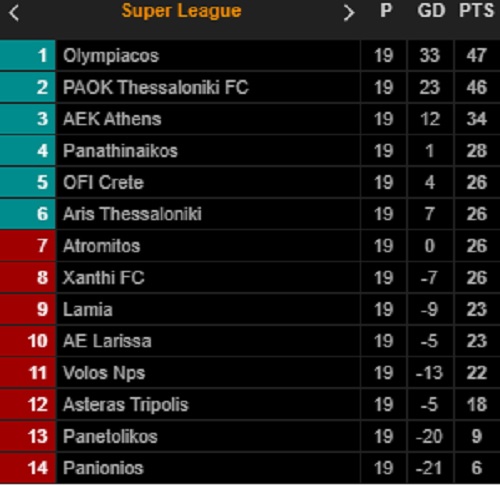