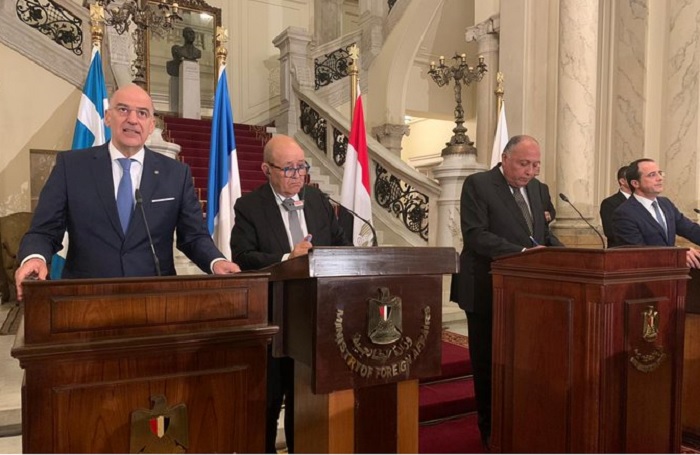 The Foreign Ministers of the four Mediterranean states of Greece, Cyprus, France and Egypt, condemned the recent maritime agreement signed between Turkey and Libya. Meeting on Wednesday in Cairo, the leaders stated that the controversial agreement undermines regional stability.
The meeting had originally scheduled as part of the trilateral cooperation between Greece, Cyprus and Egypt, but French officials joined in as well, and Italy participated as an observer.
The four foreign ministers stressed that the maritime deal is against international law, does not have legal consequences and that it violates the sovereign rights of the states of the region.
“The Turkey-Libya Memorandum of Understanding purporting to delimit maritime jurisdictions in the Mediterranean Sea infringes upon the sovereign rights of third States, does not comply with the Law of the Sea and cannot produce any legal consequences,” the joint communique states.
It adds that the ministers “reiterated the necessity of full respect of the sovereignty and the sovereign rights of all States in their maritime zones in the Mediterranean. In this regard, the Ministers strongly condemned continued Turkish actions in the exclusive economic zone of Cyprus and its territorial waters. The Ministers call upon Turkey to immediately cease all illegal exploration activities.”
Speaking at the joint press conference, Greek Foreign Minister Nikos Dendias said that the international community is witnessing in Libya “the same pattern of aggressive behavior adopted by Turkey in Cyprus and in the Aegean.”
“On Libya we are in unanimous agreement that the agreements on delimiting maritime zones and security cooperation signed between Mr. Sarraj and Turkey are null and void. As well as on the unlawfulness of the latter’s decision to deploy troops in Libya,” Dendias told the press, according to statements released by the Foreign Ministry.
The Greek Minister also said that any “import” of troops or weapons constitutes “a gross violation of the relevant UN Security Council Resolution and seriously undermines the international community’s efforts to reach a political solution to the Libyan conflict.”
Turkish Response
The Turkish Foreign Ministry on Thursday reacted on these latest developments, issuing a statement, where it called the statement made in Cairo ”based entirely on factitious arguments and false premises.”
”The two memoranda of understanding that we signed with the legitimate and the internationally recognized government of Libya, are legitimate and fully compatible with international law,” the Turkish side noted.

”Turkey, with the longest coastline in the Mediterranean has the right to speak on any project concerning the region. In order to transform the Eastern Mediterranean into an area of cooperation rather than of conflict, we would like to take this opportunity to express yet again our readiness for cooperation with all parties, with the exception of GCA,” the Turkish ministry decladed.

GCA is the Greek Cypriot Administration and is the term Turkey uses to describe the Republic of Cyprus.