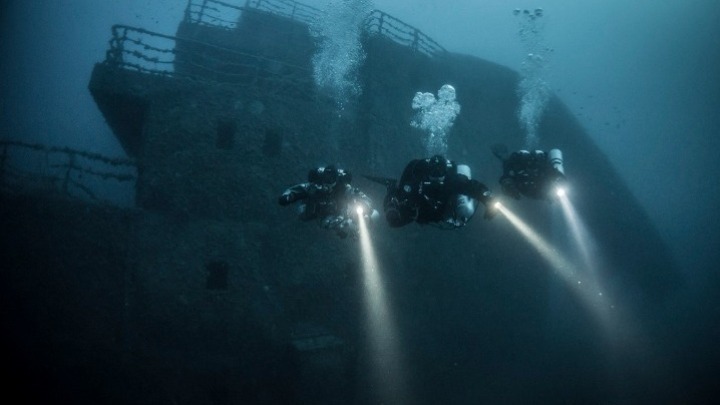 The first phase of a project to investigate and record the current state of historic Naval shipwrecks in Greece has recently been completed, according to a Hellenic (Greek) Navy General Staff (HNGS) announcement released on Wednesday.
The investigation, using a number of scuba divers, took place at the site of sunken ships located on the seabed near Skaramanga, along the Saronic Gulf and Lakki, on the Greek island of Leros.
These famous wrecks include the legendary brig “Aris,” owned by Anastasios Tsamados, which saw service in Greece’s 1821 War of Independence and later was used as a training ship until it was ceremonially sunk with full honors off the island of Salamis, on the 100th anniversary of the Greek Revolution in 1921.
The other shipwrecks which were investigated and mapped by the Greek Navy were the destroyers “Hydra” and “Vasilissa Olga” (Queen Olga).
The first phase of diving was conducted from early September until mid-November of 2019, with a second phase being scheduled to follow in 2020 in collaboration with the Underwater Antiquities Ephorate of Greece.
At that time, divers are expected to bring to the surface some of the finds which have been researched and historically verified from the video footage collected during the first phase.
The many photographs from the project will be rendered into 3-D images for each shipwreck, and the Greek Navy’s Historical Service will also organize events to showcase each ship, in which historians will discuss the heroic actions and sinking of each vessel.
The public will then be allowed to view the fascinating underwater video footage collected during the dives as well as the 3-D images of the shipwrecks to help them understand the last moments in the life of each ship before it sank.
With information from AMNA