TechNews
GreekReporter.com Greek News Art "The Carols": The Story Behind the Most Celebrated Painting in Modern Greek...

"The Carols": The Story Behind the Most Celebrated Painting in Modern Greek Art 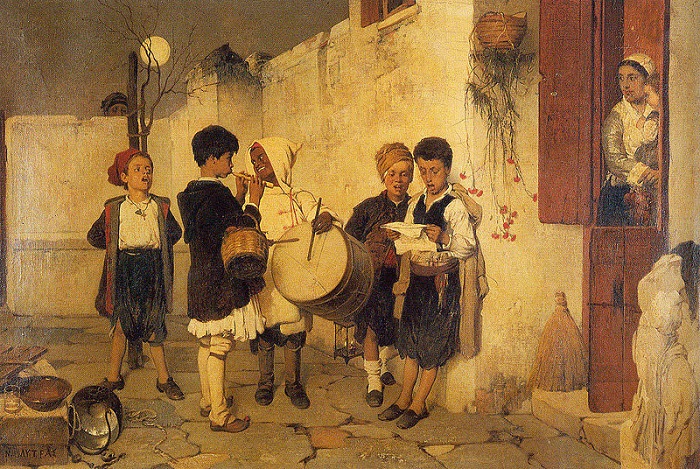 The beloved painting titled “The Kalanda,” created in 1872 by the Greek master Nikiforos Lytras, is one of the most famous works in the history of modern Greek art. It is still admired today and is widely shared throughout social media for Christmas and New Year’s greetings.
Under the soft, radiant light of a full moon, five children from different backgrounds and nationalities dressed in the clothing of the era play traditional Greek musical instruments and sing time-honored Christmas carols in the courtyard of a house.
The wife of the house stands with her toddler in the window, listening to the carols. Behind the wall, the viewer can spy the head of another child closely watching this beloved Greek Christmas tradition, perhaps not daring to take part.
The full moon and the flowers hanging from the pot on the wall give a warm and serene harmony to the whole picture, while the broom and the staked tree in the yard show the care taken by the poor household.
The statue at the bottom of the painting illustrates not only the timeless unity of Greek culture, but also the painter’s love for his father’s ancient profession, that of a marble sculptor.

Lytras, who is considered the patriarch of modern Greek painting, was a professor at the Athens School of Fine Arts, and had studied in Munich. He is considered a representative of the “Munich School” in Greece.
The Greek master embraced the principles of “Academic Realism,” i.e., with paintings which depicted scenes, whether real or imaginary, of painstaking exactitude and treatment of color, along with portraying a narrative mood.
During the time Lytras was in Munich he focused on historical painting, with subjects inspired by Greek mythology and history. After his return to Greece he began to paint portraits and scenes of everyday life.
During this period, the great Greek master wrote that “The painter should devote himself to genre painting, and to subjects that move, delight, and educate the people.”
Lytras died at the age of 72 in 1904, after a short illness which is believed to have been caused by the chemicals in his paints.

Greek Easter is the most revered time of the year for religious Greeks as they fast for 40 days, go to confession, and attend long liturgies