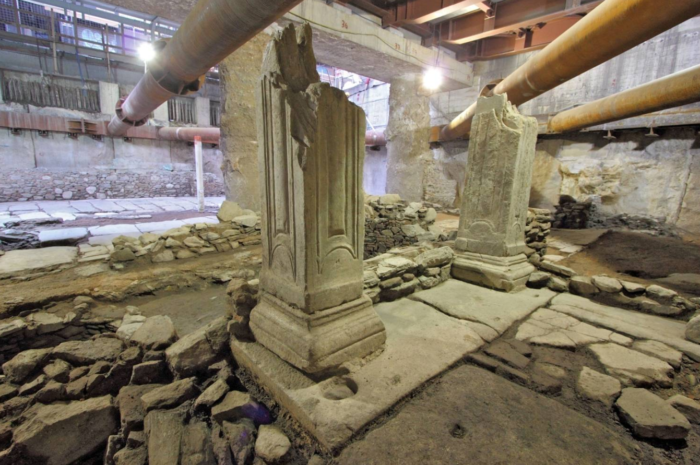 The reaction against the recent decision by Greece’s Central Archaeological Council (KAΣ) to temporarily remove the spectacular archaeological finds from Venizelos station in Thessaloniki’s new Metro system is intensifying.
This time, the well-respected European ”Europa Nostra” Federation for Cultural Heritage is asking for their ”in situ” preservation, rather than having them temporarily stored offsite during construction of the underground system.
The ”Europa Nostra” group appealed recently to the ΚΑΣ and to the Greek government directly, expressing its concerns about the recently-suggested plan which ruled against their in situ preservation.
This appeal was made public prior to the meeting of the Central Archeological Council held on December 18.
Europa Nostra notes in its statement that ”The new plan foresees the removal of the antiquities from their original setting, invoking financial criteria and arguments related to the further delay of the metro development project in case the initial plan of the “in situ” preservation of the antiquities is implemented.”
In the appeal, signed by its Executive President, Dr. Hermann Parzinger, Europa Nostra highlights what it terms the “European significance of the aforementioned archaeological remains, which constitute a unique find of an urban ensemble of monumental scale and in a very good state of preservation.”
”It is the only one preserved in the whole area once occupied by the Eastern Roman Empire and dating to the relatively unknown Late Roman and Early Byzantine period (4th-9th century AD),” Europa Nostra stated.
In the appeal, the large European cultural federation also emphasizes the need to fully safeguard the physical condition of the antiquities as well as the authenticity of the monumental collection as a whole.