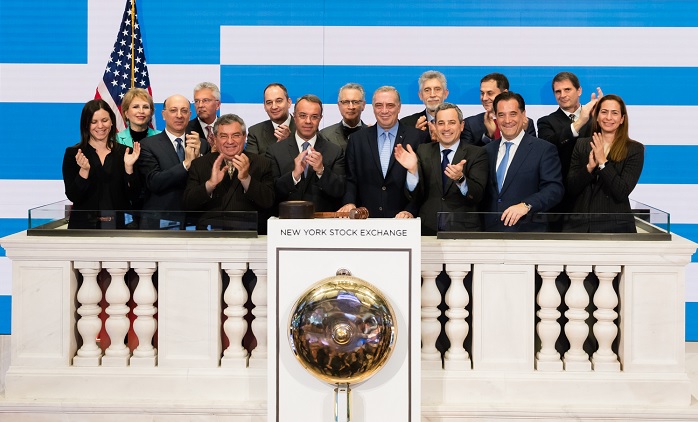 Declaring to investors that “Greece is back,” Greek Finance Minister Christos Staikouras and other government officials rang the closing bell for the special Greek day organized at the New York Stock Exchange (NYSE) on Tuesday.

The event, entitled “Greek American Issuer Day at NYSE,” was held within the context of the 21st Annual Capital Link Invest in Greece Forum at the New York Stock Exchange in cooperation with the Capital Link investment company.

The special ceremony in honor of Greece included an official reception in honor of the Greek delegation, Greek companies listed on the New York Stock Exchange and companies which participated in the 21st Annual Capital Link Invest in Greece Forum, held with great success the previous day.

The New York Stock Exchange flew the Greek flag on Wall Street and issued special commemorative medals to honor the members of the Greek delegation in an event that was broadcast live on major news stations in the United States and abroad to an estimated audience of 150 million viewers worldwide.

H.E. Christos Staikouras, Minister of Finance of the Hellenic Republic, and Dr. Nikolas P. Tsakos, President and CEO of Tsakos Energy Navigation (NYSE: TNP) and the Chairman of INTERTANKO from 2014-2018, had the honor of ringing the closing bell for the day’s trading.

Hundreds of senior executives – government and business leaders from Greece, Europe and the United States had gathered on Monday in New York City for the “21st Annual Capital Link Invest in Greece Forum.”

The Forum, organized in cooperation with the New York Stock Exchange and major global investment banks, was focused on the upbeat theme: “Greece is Back.”

With a new government which has a solid parliamentary majority and a popular mandate coupled with a clear, realistic and business-friendly strategy, Greece is expected to embark on a solid growth trajectory, organizers say.

The active support and participation of the NYSE, the world’s largest stock exchange, enhances the prestige and the visibility of the Forum and of the nation of Greece to a wider international investment audience.

It also shows the stable support of the NYSE to Greece and Greek companies, as well as the iconic Greek shipping industry and the Greek-American diaspora.

The United States’ capital markets are a major source of capital for a growing number of companies of Greek interest and the New York Stock Exchange is playing a leading role in this endeavor.