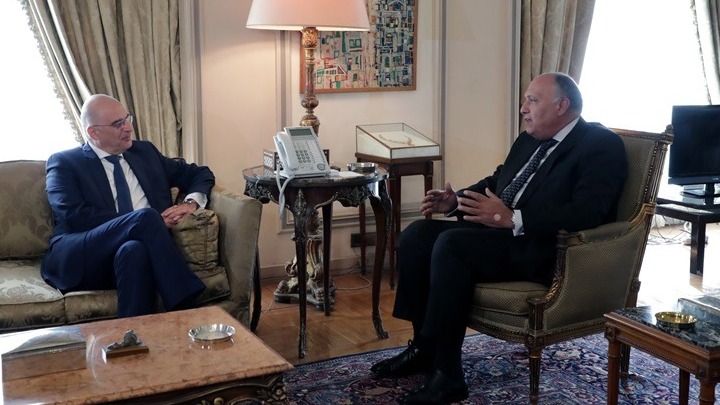 Greece and Egypt will speed up talks on the Exclusive Economic Zones (EEZ) between the two countries, Greek Foreign Minister Nikos Dendias said in Egypt on Sunday, following the controversial agreement between Turkey and Libya.
Following a meeting in Cairo with Egyptian Foreign Minister Sameh Shoukry, Dendias said they discussed issues regarding the Southeast Mediterranean and the Gulf.
The two ministers met for 45 minutes, after which they held extended talks with their respective delegations. Both countries reiterated that the memoranda of understanding recently signed by Turkey and Libya on maritime borders are legally indefensible.
“As always, Greece holds a common point of view with Egypt on most issues,” Dendias told the press.
“Of course, we discussed the two memoranda signed between Turkey and the chairman of the Presidential Council of Libya Fayez Al Sarraj. First of all, we are both under the impression that Mr. Sarraj may not possibly have the necessary legitimacy to sign these memoranda. Nevertheless, they continue to act as destabilizing factors in the greater area. We shall continue to observe the situation,” Dendias added.
The Foreign Minister said that he and Shoukry agreed “to speed up talks between the technical delegations on the definition and delineation of the Exclusive Economic Zones (EEZ) between Greece and Egypt.”
Meanwhile, Prime Minister Kyriakos Mitsotakis said that Greece will seek support from NATO at the alliance’s summit in London this week.