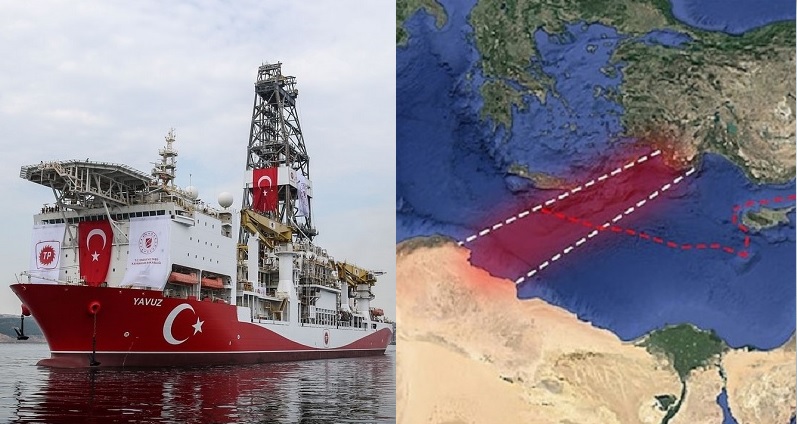 Greece responded with anger over the joint Turkish-Libyan agreement to discuss a new delineation of Turkey’s maritime borders which includes waters off the Greek island of Crete.
According to Turkish President Recep Tayyip Erdogan, his country’s sovereign waters extend eastward from Libya and include a portion of waters off Crete, as the newly-drawn map Ankara has issued shows. However, the map was not sent to the United Nations.
The move is a blatant violation of the United Nations Convention on the Law of the Sea (UNCLOS), since the two countries do not share maritime boundaries. In essence, the agreement between them has no legal validity whatsoever.
The map is presented on Turkish media shows maritime borders as — its government says– “they should be.” One Turkish news website also posted the map in a report with the provocative title, “Historic Turkey-Libya agreement to put an end to Greek occupation of East Med.”

This was just another in the long line of Erdogan’s provocative moves challenging the validity of Greece’s territorial waters.
In essence, Turkey is attempting to legitimize its expansionist aspirations by placing a third country, Libya, into the picture.
It should be noted that on November 13, 2019, before the agreement was signed, Ankara had sent a letter to the United Nations in which it presented the coordinates of the Turkish continental shelf reaching south of Ierapetra and west of Rhodes.
The Greek side did not remain passive in the face of this new provocation from Ankara. Greek Foreign Minister Nikos Dendias described the agreement between Turkey and Libya as “completely unacceptable” and “beyond all reason.”
Dendias took his disapproval of this move even further, saying that “Such an effort shows a complete lack of knowledge of geography, because it obviously ignores something that I think everyone can see – that between these two countries lies the large geographical land area of Crete.”

The Greek Foreign Ministry even formally summoned Turkish Ambassador Burak Ozugergin over the matter.
The island nation of Cyprus also decried Ankara’s move. The country’s foreign ministry on Friday issued an announcement saying “Such a delimitation, if done, would constitute a serious violation of international law… It would be contrary to the recognized principle of the Convention on the Law of the Sea and the rights of islands.”
The Cypriot statement concludes, “With the distortion of the law of the sea and the counterfeiting of geography – Turkey will gain no footing in the Eastern Mediterranean.”
Egypt also unequivocally condemned the Turkish-Libyan agreement, calling it “illegal and not binding” to third parties.