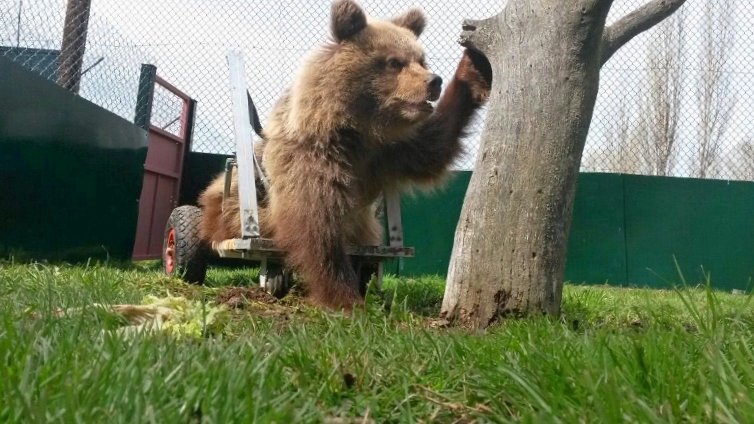 Usko, the first bear in Greece to use a wheelchair and the only bear in the world to use mechanical assistance to walk for more than four years, died recently at his home at the  ”Arcturos” bear facility in Florina, West Macedonia, Greece.
Usko was the first bear in the world to use a wheelchair for over four years.
The male bear, who was found injured and paralyzed in a forest, was rescued by the non-governmental organization for the protection of wildlife known as ”Arcturos” several years ago.
Usko passed away on November 25 after suffering from kidney failure.
Panos Stefanou, the public relations spokesman for Arcturos, told the state-run AMNA news agency “The kidney failure had nothing to do with Usco’s disability, and despite his problem, Usko showed an enormous will to live.”
The severely-injured cub had been found in the woods next to his mother, who had been shot and killed.
He was immediately transported to the veterinary school of the Aristotle University of Thessaloniki, where doctors discovered that his spine had been broken and said that he would never be able to walk again.
However,  the veterinarians saw in Usco an enormous will to live and they decided that, even if the odds were against it, they had to try to make a wheelchair specially designed for Usko’s needs so that he could move around again freely.
The little bear quickly adapted to his new conditions and his new apparatus — and as he grew up, he grew out of three different wheelchairs made just for him.
Arcturos had also carefully designed the habitat in which Usko lived in a way that would give Usko space to move about freely.
The organization had even created specially-made toys for the bear to play with and had even made a small swimming pool just for him.