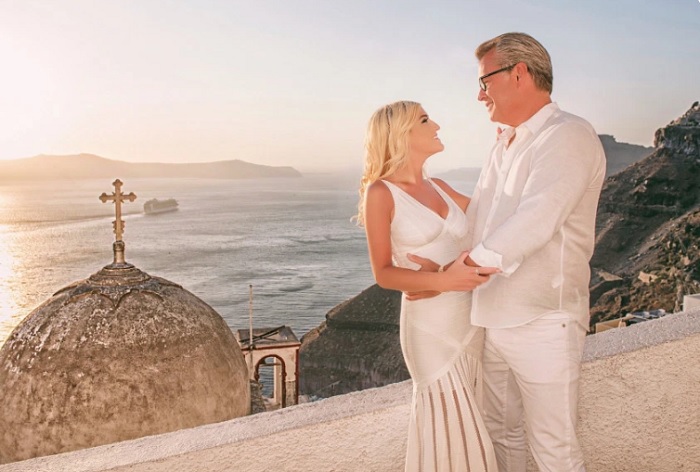 A 60-year-old American architect who has two children with ex-wife Christie Brinkley recently got engaged to his 21-year-old girlfriend on Santorini.
The couple was vacationing on the idyllic Greek island on September 15 when Peter Cook popped the question with a six-carat Glenn Bradford diamond ring in front of a church, Page Six reports.
Cook, the ex-husband of Christie Brinkley, the famous model with many appearances in the late 1970s Sports Illustrated Swimsuit issues, popped the question to his 21-year-old girlfriend Alba Jancou.
“We consider ourselves incredibly lucky to have found, in each other, our soulmate,” Cook added in a statement to Page Six. “We are looking forward to many years of wedded bliss!”
Cook, who shares daughter Sailor, 21, and son Jack, 24, with ex-wife Brinkley, 65, has reportedly been dating Jancou for about a year.
Jancou’s LinkedIn page indicates that she is currently a student at Tulane University and she expects to graduate in 2021.
This will be Cook’s third marriage. He was previously married to Brinkley from 1996 to 2008. The former couple divorced after Brinkley learned of Cook’s affair with his then-19-year-old assistant, Diana Bianchi.