GRNews
GreekReporter.comGreeceGreece Begins Celebrations For 2500-Year Anniversary of Battles of Thermopylae and Salamis 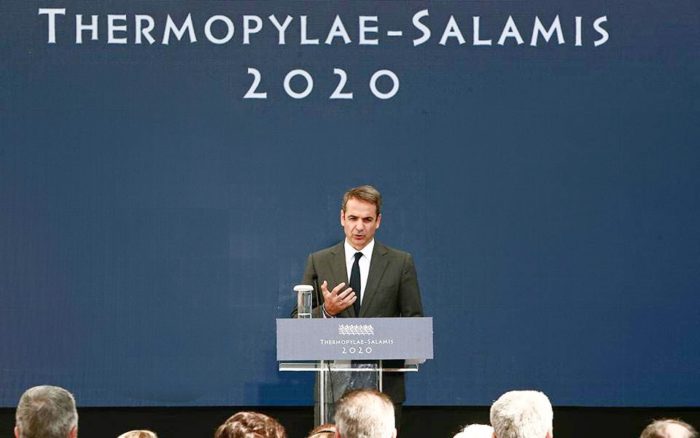 An event marking the 2500-year anniversary since the Battle of Thermopylae and the Battle of Salamis in 480 BC began in Athens on Wednesday and was attended by both the country’s President and Prime Minister.
A series of events called ”Thermopylae – Salamis 2020” will commemorate and highlight the importance of these two battles, which occurred in 480 BC for the humanity as a whole.
These two decisive battles are seen by many to mark the very beginnings of Western civilization itself, as united forces of Greeks won over the Persian threat, paving the way for Greek classical antiquity to flourish.
Greek Prime Minister Kyriakos Mitsotakis sent a message of unity during the event, which was held at Athens’ Zappeion Megaron, highlighting the importance of Greek unity throughout the centuries.
Discussing the significance of the 480 BC Battle of Salamis, PM Mitsotakis said that this was, above all, ”a unique moment of unity, as the Greek city-states put aside their differences and united to defend their freedom.”
“I keep repeating that we are too few to be divided. And this first big lesson goes back 25 centuries,” Mitsotakis noted.
According to the Prime Minister, “the Battle of Salamis also paved the way for the liberation of territories under Persian rule.” For thirty years thereafter, he related, the united Greeks embarked on campaigns to incorporate Ionia and “thus created the image, for the first time, of a nation, with Greece as its homeland, but with horizons throughout the world.”
According to Mitsotakis, next year’s 2500-year anniversary commemorates not just a historical event belonging to ancient Greek tradition, but one of the most crucial turning points in the history of mankind.
“In our times, the challenges are different. Waves of refugees and migrants are now besieging countries. The crisis is not just about borders and economies. It is also about the environmental threat,” the Prime Minister explained.
“Democratic rules and rights require new processing. Europe is called upon to measure up to its ideals in order to respond to all this. And Greece needs to renew its role as a symbol of democracy and culture and as a meeting point for the people on the road towards progress,” Mitsotakis said.
On his behalf, Prokopios Pavlopoulos, the President of the Republic, expressed his belief that Greece still remains the bulwark of the West against the East, representing the values of genuine and unselfish peace, freedom, and democracy, in a neighborhood ravaged by instability and war.
As for this proud anniversary, President Pavlopoulos noted that the Greek victories of that time showed to the entire world that ”the unconventional and creative ancient Greek spirit managed to demonstrate its overwhelming excellence and consequent categorical contrast to every illiberal form of a state organization.”