GRNews
GreekReporter.comBusinessGreek Olives and Olive Oil Exempt From US Tariffs on EU Goods 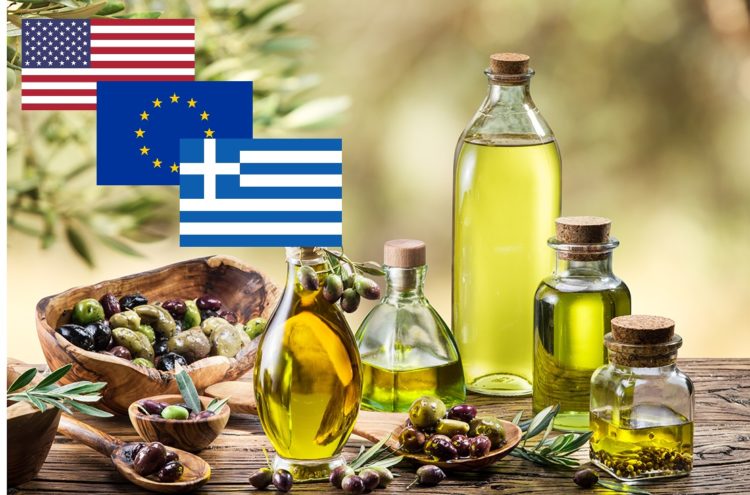 Greek olive oil and olives will be exempt from the recent tariffs imposed by the US government on a variety of European Union products, it was announced on Thursday.
The Office of the American Trade Representative recently published its full list of European products which will be faced with a 25 percent tariff when they enter the US market, after October 18.
This comes as a consequence of the Trump Administration’s recent decision to impose additional duties on $7.5 billion worth of EU goods and products, as part of an ongoing trade war between the US and the EU, partly due to the aviation antagonism between Washington and Brussels.

The EU takes note of the decision of the @wto's arbitration panel in the Airbus case.

We are ready to work with the United States on a fair and balanced solution for our respective aircraft industries.

Greece’s olive oil and olives managed to get an exemption from that list, allowing these iconic products to retain their current prices on American grocery store shelves.
The US administration decided to exempt not only the Greek but also Italian and Portuguese olive oils, as well as certain types of olive oil originating in Spain and France.
However, other Spanish and French olive oil varieties, as well as certain types of Spanish and French olives, will see their prices jump by at least 25% on October 18 in US markets.
This gives an additional advantage to Greek exporters, since the price of the Spanish and French commodities which are most competitive with Greek products will see their prices hike, while the Greek ones will not.
The Greek government had raised the issue at every possible opportunity with its American counterparts, noting the great importance of the olive oil industry for Greece’s economy.
However, other Greek producers will be hit hard by the American government’s decision, as a total of 92 products will be affected by the latest American tariffs.
The worst-hit sector will be the producers of canned fruit, such as peaches.
These products already have an 18% tariff, and beginning on October 18, they will see their prices rising by an additional 25%.
The European Union has repeatedly called on the US to refrain from such practices regarding tariffs, and has pledged to support European producers if the American tariffs cause economic harm to them.