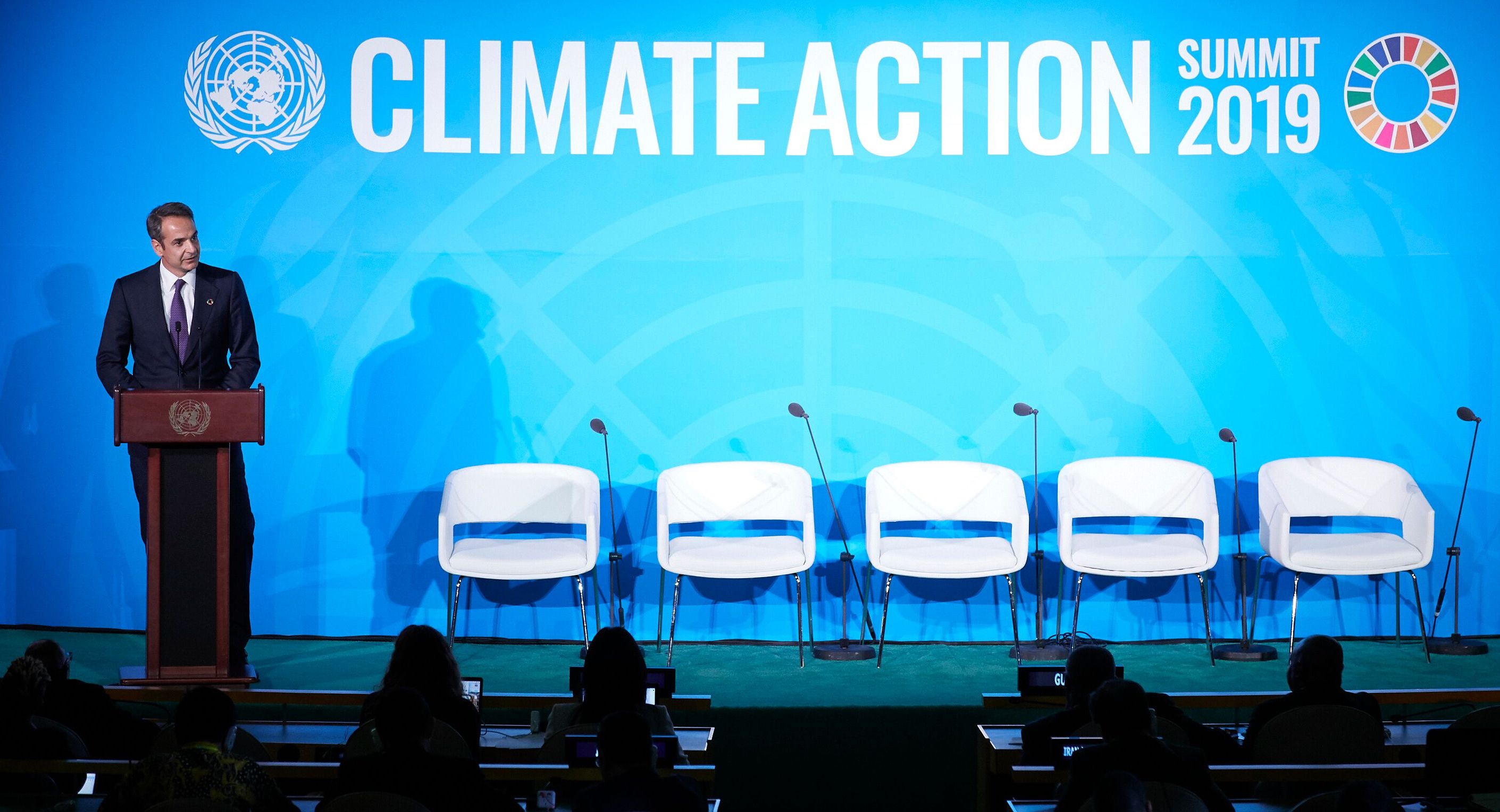 Addressing the United Nations Climate Summit in New York on Monday, Greek Premier Kyriakos Mitsotakis announced that Athens will hold an international summit at the level of heads of state and governments to address the risks posed by climate change to the world’s cultural heritage.

This announcement was made by the Greek Prime Minister as part of his administration’s initiative to raise global awareness about the threats climate change poses to global monuments and cultural treasures across the globe.

Mitsotakis said that the repercussions of climate change were already visible, and underlined that by the end of 2019 the Greek government will adopt a new national policy for energy and the climate that will include a ban on single-use plastic starting in 2021, the shutdown of lignite-run power production units by 2028 and the increase in the share of renewable resources to 35 percent by 2030.

“Our goal is to shut down all lignite-run electricity production units by 2028, and we plan to ban all single-use plastics throughout Greece by 2021.”

Referring to the current situation on climate change, the Greek Prime Minister pointed out that it affects everyone, even those who believe that human activity did not cause it.

The Greek government has placed the management of climate change fallout at the center of its policies, he said.

As he explained, Greece’s economic future is linked to its ability to protect its unique natural environment. The rise of sea level threatens our shores and our islands. Extreme weather like storms, floods and heatwaves are catastrophic for Greek society and Greek economy.

He also warned that climate change will also act as an obstacle to economic development and to the prosperity of the Greek people, as it will adversely affect economic sectors such as agriculture and tourism.

During his speech, Mitsotakis noted that Greece has taken clear initiatives to protect its cultural heritage from the effects of climate change, including the physical erosion of its monuments.

Some of the initiatives carried out with the support of UNESCO and the World Meteorological Organization, aim to tackle the risks posed by climate change not only to the cultural heritage of Greece but that of the entire world.

The Greek Prime Minister will hold a series of meetings with world leaders, including United States President Donald Trump, during his stay in New York.

The full speech of the Greek Prime Minister:

In the early afternoon of July 23rd of last year, a small wildfire started on a hill outside Athens. Fire services deal with thousands of these every year.

This one, however, was different. Driven by ferocious winds, it quickly spread and reached the suburban town of Mati. Once it entered the pine cladded residential area, it became uncontainable. People ran for their lives before any evacuation order was given.

102 did not make it. They perished in a blazing inferno. It was all over in less than four hours.

The Mati disaster shook Greek society to its core. Extreme weather events are the direct consequence of climate change. It is not a problem that can be put off for a few more decades.

It must be addressed here and now, as its implications affect the lives of those who, until recently, did not much care about the issue.

My country is a kaleidoscope of natural beauty and unique cultural heritage. Respect for the natural world was a key tenant of many Greek philosophers, who understood the implications of disrupting the delicate balance between man and nature.

Yet, ancient Greeks had no access to scientific facts; they only made hypotheses. We do not have that excuse, yet, we have failed to act.

Almost half the atmosphere’s extra, human-produced carbon dioxide, was put there after the beginning of the 1990s, when climate science was robust enough to warn us about the implications of uncontrolled greenhouse gas emissions.

Greece’s economic future is tied to its ability to protect its unique natural environment.

Rising sea levels threaten our coasts and islands. Extreme weather events such as storms, floods and heat waves have a devastating impact on Greek society and our economy.

Climate change will also act as a brake to our economic growth and to the prosperity of the Greek people as it will negatively affect economic sectors such as agriculture and tourism”.

We have made addressing the implications of climate change a core component of our government policies.

We are fully committed to the implementation of the Paris Agreement and the UN 2030 Agenda with its 17 Sustainable Development Goals (SDGs).

My administration strongly supports the strategic long-term vision for a climate-neutral EU economy by 2050.

For us it not just an obligation but an opportunity. We have already met our green-house gas reduction targets set for 2020. We produce 20% of our electricity from renewables and intend to reach 35% by 2030

The Greek government plans to adopt a new, ambitious National Strategy for Energy and Climate before the year-end.

Our goal is to close all our lignite power plants by 2028. And we plan to ban single usage plastics across the country from 2021.

However, climate change does not only affect our present and future. It also affects our past, our history.

Extreme weather events and the long-term impact of adverse climate conditions have the potential to significantly damage cultural and natural heritage sites.

But to also disrupt century old ways of life. When olive trees are destroyed by bacteria and olive fly it is not just an economic catastrophe.

It affects the lives of local communities to such an extent that it poses a threat to our unique intangible cultural heritage.

Greece is deeply concerned about the potential impact of climate change on our cultural and natural heritage.

We convened, last June, in Athens, an International Conference, entitled “Impacts of Climate Change on Cultural Heritage: Facing the Challenge”, aiming at raising awareness and encouraging global action on the issue.

Its outcome has been included in a proposal, which, with the supporting partnership of UNESCO and WMO, was presented at the Climate Action Summit.

The focus of our effort should be on prevention and monitoring. Besides major disasters, changes are often subtle, gradual and do undetected in early stages. Raising awareness not just at the global but also at the local level is key for achieving our goals.

I would like to thank the secretary-general, all UN member States, International Organisations and non-state actors that supported this Initiative and to encourage those who have not done so yet, to endorse its commitments.

My country intends to convene a High-Level Meeting next year in Athens, with the aim of adopting a declaration for the protection of cultural and natural heritage from climate change impacts.

2020 marks 2500 years since the naval battle of Salamis. The Athenian victory paved the way for the golden century of classical Greek Athens.

In the shadow of the Acropolis, let us pledge that a monument which has survived for 25 centuries will continue to be a beacon of beauty and natural balance to be appreciated by generations to come.