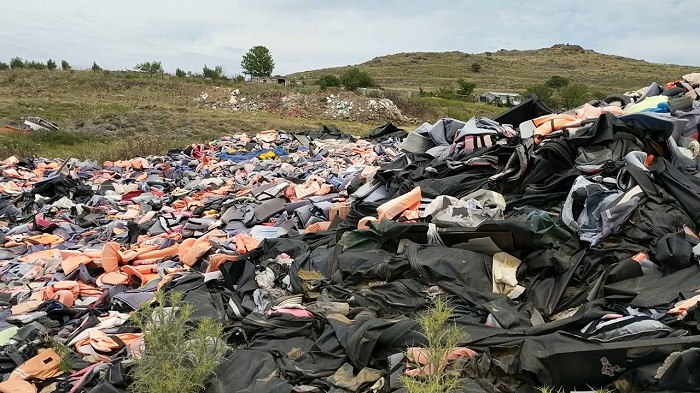 Local authorities on Lesvos issued a warning on Thursday about the  environmental hazard of thousands of abandoned life jackets used by illegal migrants crossing into Greece from Turkey.
In a letter sent to the Ministry of Citizen Protection and other relevant authorities, Taxiarchis Verros, the mayor of West Lesvos, calls for immediate action in response to what he believes is an urgent issue, given that life jackets are not recyclable in any way.
Verros asked for assistance in the removal of some 12,000 cubic meters of life jackets which have amassed on the island, as well in the day-to-day collection of discarded life jackets and dinghies used by those who continue to land on the island every day.
A mountain of plastic has grown in the north of the island, rising high above the sea. The orange-spotted trash heap suddenly appears at the end of a small winding road between hilltops.
Life-jackets, pieces of rubber dinghies, clothes, and pretty much anything one can bring when going to a new country, lie in huge mounds out in the open. Scores of broken boats repose on the outskirts of these piles and further up the hill.
It is estimated that each asylum seeker and migrant who lands on the shores of the Greek islands brings an estimated eight kilograms of (mostly plastic) trash with them.