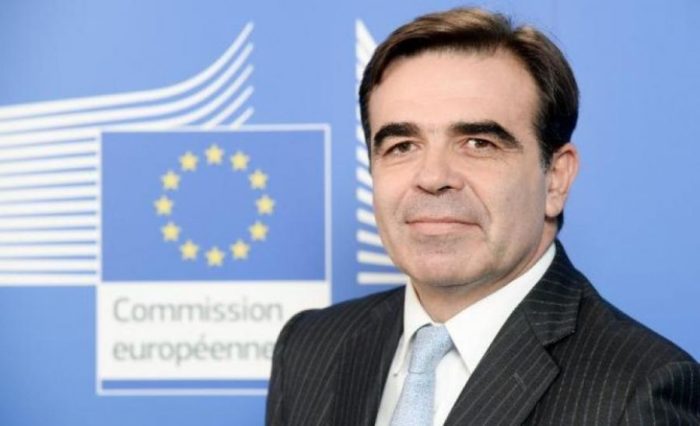 Greece’s Margaritis Schinas will become the next Vice President of the European Commission, with responsibility for the portfolio called ”Protecting the European Way of Life,” it was announced on Tuesday.
According to the statement, which was released by Ursula von der Leyen, the President-elect of the Commission, Schinas will be one of the eight thematic vice presidents of the new administration, which is the EU’s equivalent to national governments.
The vice presidents will be in charge of the top priorities set forth in the new administration’s political platforms.
This is the first time Greece has risen to such a high position within the European Union.

Schinas, a 57-year old from Thessaloniki, has served as Chief Spokesman of the European Commission since 2014. A graduate of the London School of Economics and Political Sciences, he has worked for various European Commissions since 1990.
The new commissioners and vice presidents will have to be approved by the European Parliament before they assume office on November 1.
The Cypriot Commissioner Stella Kyriakides, will be tasked with the governance of the commission called Europe’s Health.
Von der Leyen said that climate change is the EU’s number one priority, noting that ”at the heart of our work is the need to address the changes in climate, as well as in technology and demography that are transforming our societies and way of life.”
To this end, the Dutch Vice President Frans Timmermans, who comes from the Group of the Socialists and Democrats, will coordinate the work of the new ”European Green Deal” under von der Leyen’s administration.
The President-elect concluded her announcement by adding that ”this team will shape the ‘European Way’ because we know that we are stronger by doing together what we cannot do alone.”
Mitsotakis: Schinas nomination, a vote of confidence to Greece
The portfolio offered to Margaritis Schinas justifies the government’s choice in proposing him as Greece’s European Commissioner, Prime Minister Kyriakos Mitsotakis said in a statement on Tuesday.
Mitsotakis noted that “the nomination of Margaritis Schinas, who is experienced and worthy of the vice-presidency of the Commission for security, migration and mobility, is a special honor. A vote of confidence in him, but also in Greece. This proves the country is now being upgraded to a factor of strength and development in the European scene. And that our country is changing rapidly within the (European) Union. (Greece) now has prestige as well as executives for important portfolios,” said the Greek premier.

The Incredible Stories of Thousands of Greek Orphans Taken Abroad