By Helen Skopis
August 26, 2019
Facebook
Twitter
WhatsApp
Linkedin
Email
Erikos Kranidiotis and his friend Stellios Stamatakis have an undying love of the sea and all of the innumerable wonders of the underwater world, despite the many dangers present in diving in underwater caves.
Both in their early forties, the divers also have daytime jobs – Kranidiotis is an employee at a large Fintech company and Stellios works in the telecommunications industry.
They have completed an impressive total of over 70 different cave dives around Greece in the past three years, exploring grottoes on the islands of Evia, Kefalonia and Antiparos.
However, many of their dives have taken place on the Peloponnesian Peninsula itself. Their latest dive was part of a mission to explore the ancient, “forgotten” mines of Lavrio, many of which are now underwater.
Kranidiotis spoke to the Greek Reporter about how they got involved with the exploration of the Lavrio mines and what the two divers discovered there.
I built a website about five months ago (titled “addicted2h2o.com”) and a team of cavers who were exploring the area of Lavrio found us through that site. They saw the kind of dives that we did, that we are competent in cave diving, and they contacted me.
In the explorations that they had done, they had reached a point where there was water which was 5 levels beneath the ground, about 100 meters (328 feet) in depth, in this Lavrio area. Obviously, they couldn’t continue further, but they were very interested to find out if the mine continued underwater, and that was something that we established from our dive.
Does the mine continue on, then?
Yes, it does continue, and in fact, we reached a point where Stellios secured a cave line on one of the wooden poles, and that’s the point where we return — but the mine continued. So it could be that there are further levels in this mine – it could be that it goes to a 6th or 7th level beneath the ground — or even more.

Are you going to explore that?
We would need a bigger team of people that are needed to carry the equipment, because obviously if you are diving it’s not good to carry all your gear for about an hour or an hour and a half, and it is such difficult terrain.
Ideally, the diver should be gear-free. They just need to get to the point of entry into the water, and that requires quite a number of people. That is something we’ll be looking hopefully to do in the late autumn, early winter time.
What is so unique about this mine?
The unique part of it is that there is a lot of history to it. It originates from the 5th or 6th century BC, when the ancient Greeks used this area to mine a lot of minerals, mainly silver, which was used to fund the Parthenon in the 5th century BC, in what they call the Classical Period.
Most of the Parthenon was funded by these metals, primarily the silver that was mined in this area.
In later years, the late 1800’s to early 1900s, it was privately owned by several companies. Οbviously, mining continued using the more modern techniques that were available at the time, but there’s a lot of history in that area, generally in Lavrio where we explored, which is Agios Constantinos (St. Constantine) and Plaka.
They are separate mines but they are also connected in that they were the entire area which is called “Lavriotiki.” Ιt was the first industrial mining that took place in ancient times – kind of where it all started, in the case of mining. 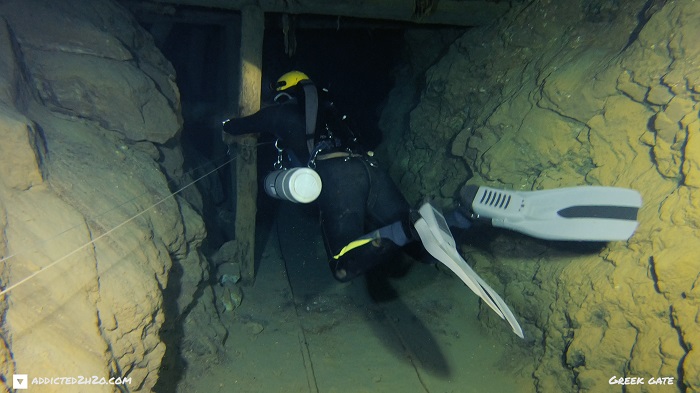 What was your experience like going into this mine?
It was like going back into time! One of the best things for me, at least, in cave diving in general is that you visit caves that are exactly as they were hundreds or thousands of years ago because they’ve been covered by water — it’s kind of a time capsule.
You visit mines where there are huge stalactites or stalagmites. It’s like time has frozen, it has paused at that time when the cave gets filled with water so, in a sense, you are kind of visiting the past and you’re getting an energy of what it was like thousands of years ago.
And it’s the same with this mine – the history behind it and reading the story that originated from the 5th – 6th century BC. It was the first mine dive I have done where it was quite unique, feeling you are amongst the first people to look at this mine. It was amazing, especially the section we entered where you can see the tracks used by the     carts to transport the excavated ore and metals out to the surface.
Another thing for me is that with cave diving, you always have the inquisitive nature to take things a step further to see what is behind the other room, the other corridor — and that is obviously thrilling, but at the same time that’s the part where you need to be careful not to go too far.
What are the dangers of diving?
The dangers are that you have got to be very careful and you need to very well-trained for diving in any “overhead” environment. You are in very limited space sometimes and you depend on the air supply that you have with you. There are very strict protocols that you have to follow.
And strangely, another key element to be able to do this is that you must have an amount of fear. A lot of people get the impression that doing this kind of diving, or cave diving in general, that you’re fearless, but it’s not the case.
This isn’t for adrenaline freaks or junkies. It’s totally the opposite: you have to be very calm and composed and you have to have an element of fear before starting a dive like this. If you don’t, then things will probably go very wrong because you need to set limits. You need to respect the limits set by the environment and your own personal limits.