GRNews
GreekReporter.comGreeceTatoi: The Glorious Past and Promising Future of Greece's Historic Palace

Tatoi: The Glorious Past and Promising Future of Greece's Historic Palace 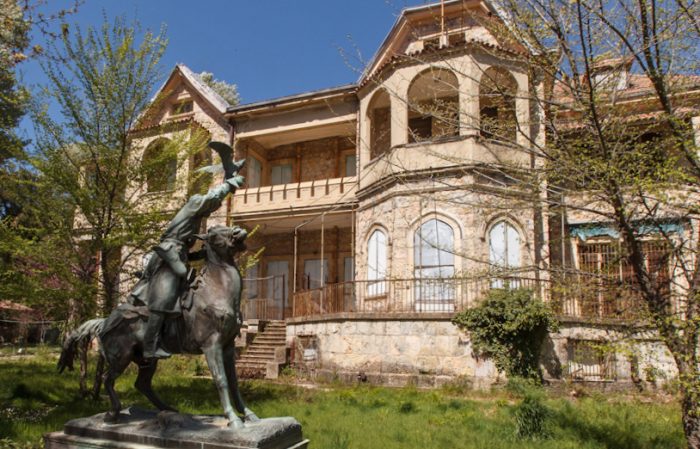 As Greece’s new conservative government of Kyriakos Mitsotakis declared its intention to revive the famous Tatoi Palace and bring its glorious past back to life, many have been wondering what the story is behind this historic place, which shaped Greece’s political life in the 20th century.
The Tatoi estate covers an enormous total area of 4,500 hectares, which is approximately 45 million square meters or 45,000 Greek stremmata.
It was first bought by the Greek royal family in the 1870s. Since then, it has endured numerous changes of ownership and usage, following the turbulent political life of the country during the late 19th and the 20th century.
Located on a slope of Mount Parnitha, the estate lies 27 kilometers (16 miles) from downtown Athens, in an area covered by woods, with rivers and abundant wildlife.
The Palace complex also includes a large number of buildings which all served different purposes for the royal family while they lived there.
Originally designed as a summer retreat for the family, it later became the permanent residence of the Greek royals, who found its premises more private compared to the official Royal Palace (now the Presidential Palace) in downtown Athens.
It was Greece’s King George I who originally had the idea of establishing a summer retreat for his family.


Apart from the main building, the Palace, which was luxurious but not ostentatious, as every royal building in Greece has been since the 1800s, the estate had an entire system of personnel quarters, storehouses, stables, apiaries, and stock farms; everything that a royal family could want at its palace in the country.
The Tatoi Palace has lived through glorious as well as disastrous moments, in complete accordance with the turbulent history of this country.
From the fire of 1916, during World War I, to the confiscation of 1926, when the Second Hellenic Republic was established, and from the Royal return in 1936 to the official abolition of the monarchy in 1974, the estate has been a witness to all the major events in Greece’s recent history.
At least twenty royals have been buried on its premises, starting from Princess Olga of Greece and Denmark, who died in 1880, up to Lady Katherine Brandram, the Princess of Greece and Denmark, who passed away in 2007.
Five heads of state are also buried on the grounds of the Tatoi Palace, including George I of Greece, Alexander of Greece, Constantine I of Greece, George II of Greece and Paul of Greece, the father of the last Greek king, Constantine II.
The Tatoi Palace and its land have seen numerous changes to its ownership throughout the 20th century.
After the Third Hellenic Republic was established in 1974, Tatoi went under public ownership.
The Conservative government of Konstantinos Mitsotakis, the father of today’s Prime Minister Kyriakos Mitsotakis, introduced a law which granted 400 hectares of the land, including all of its main buildings, back to the former royal family of Greece.
This caused widespread reaction throughout the country, and just two years later, the Socialist government of Andreas Papandreou brought the entirety of the estate back into public ownership.
A long-lasting judicial dispute then began between the former royal family and the Greek state.
The European Court of Human Rights decided in 2003 that the former Greek royal family deserved compensation of €12 million, an amount estimated to represent only one percent of the total value of the estate.
In an effort to ridicule the former royals, the Socialist government of Costas Simitis decided to pay the compensation using money from the Greek Natural Disasters Fund, in an effort to show the public that the former royal family was depriving money from the most vulnerable Greeks.
In response to this move, the former royal family decided to create the ”Anna Maria Foundation,” after the name of the former Queen who is the wife of King Constantine II.
The Anna-Maria Foundation is focused on providing help to groups of people or areas which have been hit by natural disasters in Greece.
Understandably, this turbulent history of disputes, neglect and political infighting has left the estate to face its fate alone.
Most of the buildings on the estate have endured severe damage, due to both weather conditions and because of vandalism.
The latest announcement from the new Greek government that one of its top priorities is to revive the Palace to its former glory, brings hope to history lovers that this important part of Greece’s modern history will return to life, and enlighten its visitors about the country’s storied past.
And the Tatoi could possibly even become one of the main mountain escapes for Athenians, as with only a few minutes’ drive from downtown Athens, one can enjoy the beauty of Parnitha’s nature to its full extent, in an area protected by the European Union under the Natura 2000 initiative.