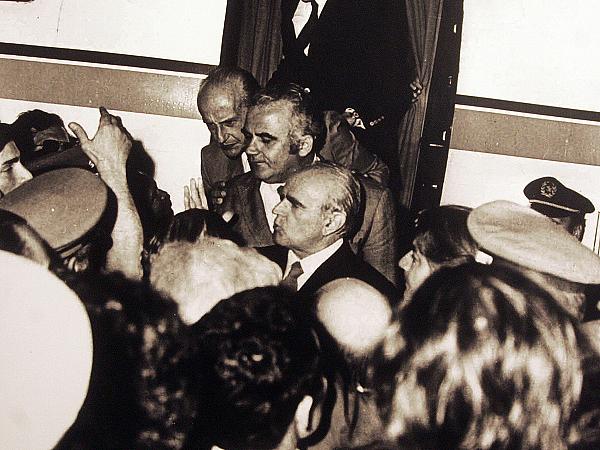 The five days between July 20 and July 24, 1974 were the most turbulent, and the most decisive, in modern Greek history. The Turkish invasion to Cyprus, the collapse of the seven-year-long military junta, and the birth of the new Hellenic Republic, all took place within that short period.
Turkey’s attack on Cyprus created a domino effect which caused the dictatorship to crumble, as Dimitrios Ioannidis relinquished power on July 23 and called for a government of national unity.
One day later, Constantine Karamanlis, once self-exiled to Paris, arrived in Greece on the airplane belonging to French President Valery Giscard d’Estaing. Karamanlis immediately formed a government of national unity to heal the wounds of the seven-year military rule, making some quick and decisive moves.
It was dawn on July 24, 1974 when Karamanlis arrived with thousands of people welcoming him at the airport carrying white candles, which signified the Resurrection of Christ. The jubilant reception of Karamanlis, with people celebrating and dancing in the streets, was an outburst of unbridled joy after seven years of cruel repression.
On July 25, 1974, Karamanlis addressed the people of Greece, asking them to show political maturity in those difficult times. On the same day, in Geneva, the Greek-Turkish negotiations on the Cyprus crisis were launched. The head of the Greek delegation was Deputy Prime Minister and Minister of Foreign Affairs, Georgios Mavros.
On July 30, 1974, an agreement was reached in Geneva on the restoration of constitutional order in Cyprus, as well as the recognition of the existence of two separate administrations. Further negotiations on a range of subjects were ongoing.
On August 15, in a new speech to the Greek people, Karamanlis stated that “the armed confrontation of the Turks in Cyprus became impossible due to distance and due to the known fait accompli.” The ceasefire in Cyprus took place at 18:00 on August 16, 1974.
On the homefront, the new political forces in the country managed to establish the most complete, up until then, political system to exist in the modern Hellenic Republic.
Following the establishment of the National Unity government and the handling of the consequences of the Cyprus tragedy, all political parties, including the Greek Communist Party (KKE) — which had been outlawed since 1947 — would be allowed to participate in the upcoming elections of November 17, 1974.
On December 8, in a referendum over the establishment of a Republic or the return of exiled King Constantine II, 69.2% of Greeks decided on a Republic and 30.8% on the return of the monarch. The modern Hellenic Republic, as we know it now, was established on that day.