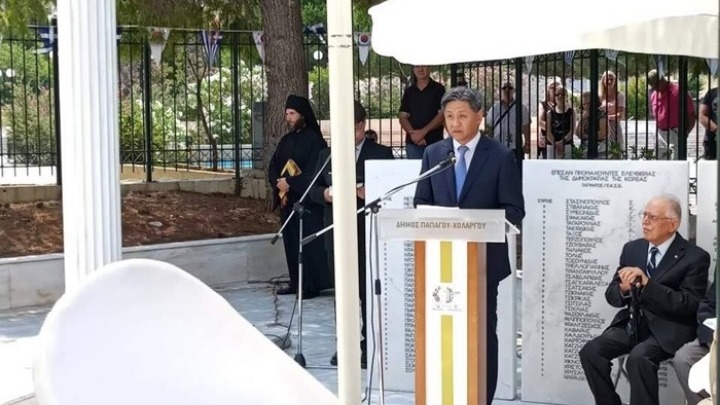 Ambassador of the Republic of Korea to Greece, Soosuk Lim, said on Tuesday that he will help bring to prominence the actions and sacrifices of Greek veterans of the Korean War.
The ambassador made his remarks at a memorial service on the 69th anniversary of the Korean War, which took place at the “Monument of the Fallen” in the Papagos district in Athens.
Lim mentioned the creation of a symbolic work of art as well as audiovisual material within a specially expanded exhibition area at the Athens War Museum, which are intended to highlight the significance of the participation of the Greek Expeditionary Force in the Korean War.
Lim expressed his gratitude and respect to the Greek veterans and family members of the deceased during his greeting, noting that Greece, as a traditional ally of Korea, sent a force of 10,000 men to Korea to defend its freedom and democracy.
The Korean ambassador praised what he termed as the “seventy years of a continuously developing high-level bilateral friendship and cooperation based on special ties between the two countries, created by the expedition of the Greek Expeditionary Force in the Korean War.”
In a Thursday announcement released by the Korean Embassy, it was noted that Greece sent the Expeditionary Force – which included a land battalion, a squadron of pilots and seven transport aircraft – to the Korean War as a member of the United Nations.
The announcement reiterated the country’s gratitude to the nation of Greece by noting “The prowess and the actions of the Greek soldiers in the battles that determined the course of the war, such as Hill 381, at Nori Hill, and Jangjin Lake, was known and duly noted: of the Greek soldiers, 186 died in the battlefields and 610 were injured.”
The Korean Embassy’s memorial event included the playing of the national hymns, the laying of wreaths and a dinner, presented in honor of the veterans, which was accompanied by traditional Korean and Greek music performed by the officer’s band of the Greek Air Force.
Source: AMNA