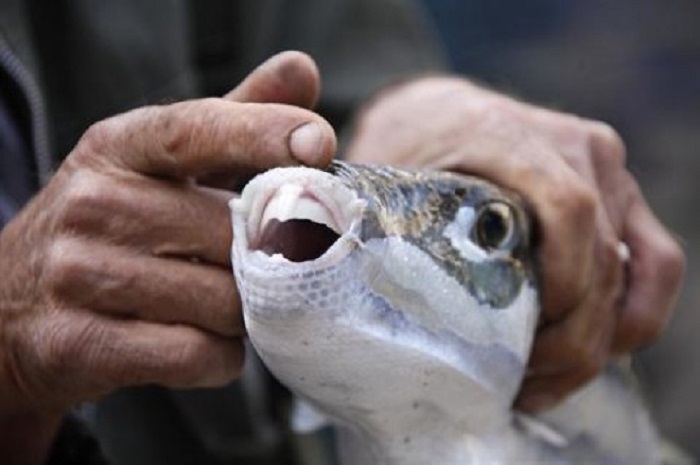 Marine biologists in Greece have recently launched a program to control a highly toxic fish that has been spotted in the Aegean in the last few years.
The Hellenic Centre for Marine Research (HCMR), a governmental research organization, has expressed concern over rising numbers of the lagocephalus sceleratus, commonly known as the silver-cheeked toadfish.
In recent years, the fish, described as a “highly toxic invasive fish,” entered the Mediterranean from the Indian Ocean via the Suez Canal. It has been spotted off Crete, the Dodecanese and the islands of the southern Aegean.
Similar to other pufferfishes, it is extremely poisonous if eaten because it contains tetrodotoxin in its ovaries and to a lesser extent its skin, muscles, and liver, which protects it from voracious predators. It becomes toxic as it eats bacteria that contain the toxin. This deadly substance causes paralysis of voluntary muscles, which may cause its victims to stop breathing or induce heart failure.
Footage captured on the island of Karpathos late in May of 2019 shows the fish swimming near the beach, where dozens of curious swimmers gathered to get a glimpse of the unusual fish. It was reported that the fish even bit the finger of a swimmer.

Speaking to Kathimerini, Nota Peristeraki, a researcher at the HCMR, said the presence of the fish was first recorded in 2003 off the coast of Turkey.
She says it is imperative that locals and tourists, especially those who engage in fishing activities, are informed about the dangers of consuming the fish.
Peristeraki sternly warned “it is strictly forbidden to sell or consume it.” She added that the species had spread to the Mediterranean due to climate change and rising sea temperatures.
She also noted that, unfortunately,  none of its natural predators had followed it on its journey from the Indian Ocean.