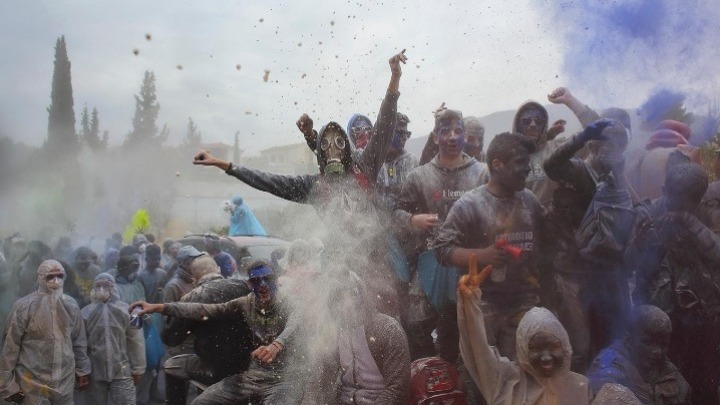 The idea behind Athens Photo World, which opened in the Greek capital on Friday, is to reflect daily life as captured by the lens of some of the most acclaimed Greek and foreign photojournalists.
The photographs will be enlarged and projected in Athens streets and public buildings, at Syntagma Square, the Gazi Technopolis, the Athens University and the railings of the National Garden.
The photos will be accessible to young and old, without any charge or timetable, while the entire event is dedicated to the memory of Yannis Behrakis, the award-winning photojournalist and editor at Reuters.
An exhibition of 70 influential photographs from his collection was inaugurated on the fourth floor of the National Library at the Stavros Niarchos Foundation Cultural Centre (SNFCC).
In addition to the exhibitions, an international award will be established that is named after Behrakis, who was an eyewitness to events that are now termed “contemporary history” at the time they happened.
Athens Photo World is the first festival organized by photojournalists in Greece and is based on an idea by Thanassis Stavrakis, chief photographer at Associated Press, with a grant from the Stavros Niarchos Foundation.
More than 120 photographers will participate in the first APW with some 750 photographs, which will be digitally displayed each night on the outer walls of buildings at three central and busy locations in Athens: the Greek Archaeologists Association at 134 Ermou Street, the Athens Technopolis in Gazi and the National and Kapodistrian University of Athens (EKPA) building.
Stavrakis explained to the Athens-Macedonian News Agency (ANA) that the photographs are purely news-oriented and “anti-picture postcard” but “without this meaning that journalists with a good eye and artistic work with special conditions and lighting techniques are excluded.”
The photographer noted that the idea for the festival first came in 2008 but the ensuing decade of crisis and upheaval had left no time for festivals. “In 2017 I returned to the idea and we exchanged views with Behrakis. It was his idea to establish an international photography award of 15,000 euros that now has his name,” he said.
“We are also establishing a Greek award of 5,000 euros for photojournalists who live and work in Greece and Cyprus, regardless of their nationality,” he said, while noting that the exclusive sponsor of Athens Photo World for the next three years will be the SNF.
According to ANA and ERA photojournalist Yiannis Kolesidis, who helped organize Athens Photo World, photojournalism is  “a combination of many elements, primarily of your aesthetics and reality. Photographs always tell the truth…you continue to develop creatively,” he said.
For Lefteris Pitarakis, the chief photographer at Associated Press in Turkey and one of the best war photographers worldwide, the secret is in managing to “communicate” a harsh event without causing shock and revulsion.
“I have taken thousands of photographs of massacres that cannot be seen by the human eye, I keep them in my file as evidence. My objectivity is the desire to honestly tell the story. With love for people and what they are going through wherever they are, in Gaza, in Iraq, in the fire at Mati. The fact that people allow us to photograph them at the most difficult moments of their lives is a great responsibility, a great weight that we cannot ignore,” he said.
Symela Pantzartzi, an ANA photojournalist that has contributed her work to APW and is also special secretary of the Greek photojournalists’ union, said that the main reasons why the festival has an international scope and prospects was that “Greece, after 2008 and the eruption of the crisis, was described by foreign news agencies as a war zone. They sent photographers with great abilities and the flexibility to adapt, for example to the violent protests in the center of Athens, which was a situation that was not so familiar in other European cities.”
Athens Photo World will run through June 16 and the full program of the seven exhibitions and six events in English can be viewed here.
(Athens-Macedonian News Agency)